January 10, 2017  by Cleantech Canada Staff, with a file from The Associated Press 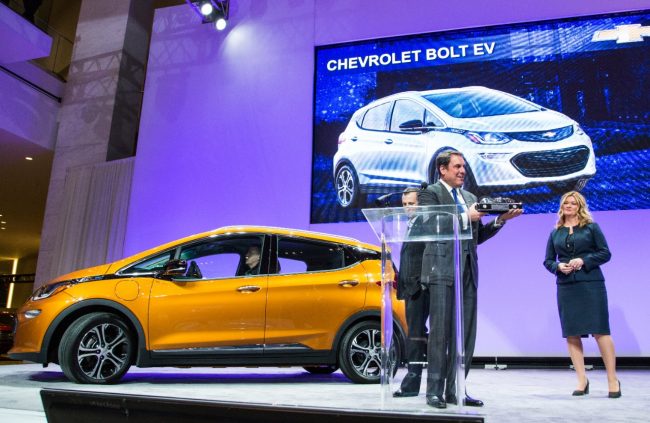 The 2017 Chevrolet Bolt is the first electric vehicle to win North American Car of the Year award. PHOTO: GM

DETROIT—For the first time, the North American Car of the Year is an electric.

The Chevrolet Bolt earned the top honour at the North American International Auto Show in Detroit earlier this week, beating out the Genesis G90 and Volvo S90.

The Bolt, which touts a 383-kilometre (238-mile) range hit select dealerships last fall and will be widely available across the U.S. and Canada this year. In Canada the vehicle will sell for as low as $31,434, once provincial incentives are factored in, while it will sell for about US$30,000 in the U.S. after applying federal tax credits.

“We didn’t have all the answers when we started the program—in terms of how far we were going to get range-wise, how light are we going to get the car and … sell price,” he said. “We hit on all cylinders on this, so to speak, even though there’s not any in the car.”

The Honda Ridgeline pickup and Chrysler Pacifica minivan—which will also be available in hybrid form next year—took home the awards for 2017 North American Truck and Utility Vehicle of the Year, respectively.

About 60 automotive journalists serve as judges for the competition. Vehicles must be new or substantially changed to qualify.

With the North American Car of the Year distinction tucked firmly under its floor-mounted battery pack, the Bolt hits the consumer market amid significant hype and speculation. EVs have so far failed to attract mainstream interest from North American buyers, but General Motors touts the hatchback as a practical vehicle.

Tesla Motors Inc’s hotly-anticipated Model 3, which is expected to begin rolling out late this year, will be in direct competition with the Bolt, fueling reports of a showdown that pits practicality against sex appeal.

Both new cars will test the North American appetite for affordable electric vehicles.