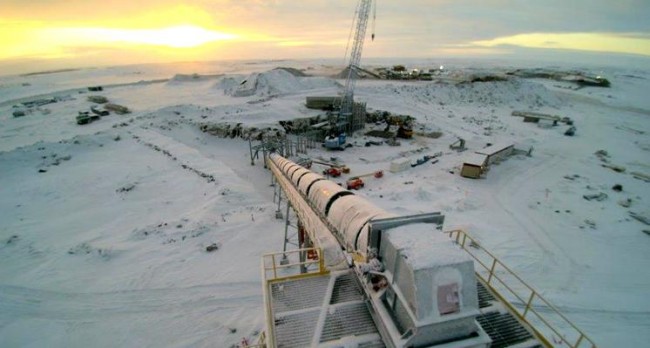 CALGARY—De Beers officially opened its new Canadian headquarters in Calgary July 6 after relocating from Toronto as it prepares to open what it calls the biggest diamond mine under construction in the world.

Kim Truter, the CEO of De Beers Canada, said the company weighed where it was best to locate its office with two mines north of Yellowknife, one in Ontario and exploration activities across the country.

“We looked at a lot of options because we had to look at our centre of gravity in relation to where our operations were,” said Truter.

“And then, taking into account things like logistics, cost of living, attraction and retention—so all of those criteria—and Calgary came out the winner,” he said.

The new office is right next to the Calgary International Airport, giving the company convenient connections to De Beers’ head office in London as well as its remote mines in Canada, Truter said.

Mary Moran, head of Calgary Economic Development, said she was thrilled to have a company like De Beers Canada choose the city for its head office.

“There are company and then there are companies,” said Moran. “We are certainly honoured and delighted that Calgary is part of De Beers’ global presence.”

The Calgary office will have close to 70 staff, down from closer to 100 employees it had at its previous Toronto office.

The reduction is part of a broader consolidation of De Beers staff in Canada, with some positions in Yellowknife also eliminated and others outsourced, said Truter.

Overall, the company has dropped its staff and contract numbers in the last year from around 2,200 to 1,300 today.

The restructuring comes as the company faces a depressed diamond market that forced it to suspend production at its Snap Lake mine a couple hundred kilometres northeast of Yellowknife last year about a decade ahead of schedule.

The softened diamond market has hit the market for both small and large stones, with Vancouver-based Lucara Diamond Corp. last week failing to sell the largest diamond found in over a century at auction.

But the downturn hasn’t stopped DeBeers from going ahead with the $1-billion Gahcho Kue mine in the Northwest Territories that it expects to open later this year.

The new mine will employ about 550 staff and contractors, with some of the more than 400 people who lost their jobs at Snap Lake moving to the new mine.

Truter said the Snap Lake underground mine was a complicated operation that was troubled from the start, and doesn’t expect similar issues at the open pit Gahcho Kue mine.

He said the company is also working to add to the mine-life of its Victor mine in northern Ontario that is scheduled to close in 2018.

On Wednesday, Dominion Diamond Corp, one of De Beers’ biggest competitors in Canada, announced it was going ahead with a US$647 million expansion of its Ekati diamond mine in the Northwest Territories that will add eight years to the mine’s life.