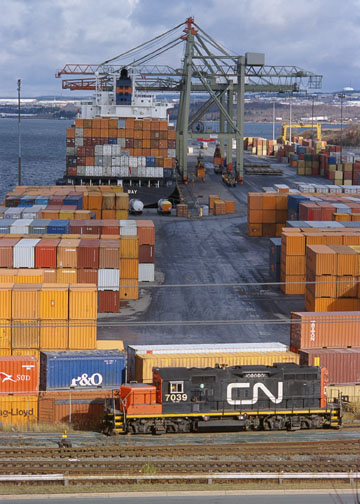 CN said it “had a good start to the year,” even as lower commodity shipments hit its bottom line. PHOTO: CN

MONTREAL—Canadian National Railway reported a higher than expected net profit in the first quarter but said lower commodity shipments weighed on revenue and have prompted a downward revision to the company’s 2016 financial outlook.

But revenue slumped four per cent to $2.964 billion from $3.098 billion, with declines of two per cent in grains and fertilizers, 10 per cent in petroleum and chemicals, 18 per cent in metals and minerals and 42 per cent in coal.

“We had a good start to the year,” CEO Claude Mongeau said during a conference call.

“We remain constructive about our prospects for the full year, even though there are some challenges out there.”

Analysts polled by Thomson Reuters had expected net income of $734.99 million or 92 cents a share on revenue of $3.015 billion.

Crude rail volume dropped by half to 14,000 carloads, with pricing making crude by rail the least profitable of the various commodities CN ships.

Its frac sand business was down 45 per cent and coal was cut in half, accounting for 3.1 per cent of total business, the lowest of any railway.

CN said it expects crude and frac sands volumes to continue to decline until reaching a bottom later this year, with coal hitting a low in late 2017.

In its financial report issued Monday after markets closed, CN said its profits got a $57 million lift from the lower Canadian dollar.

The company’s operating ratio, a metric that tracks operating expenses as a percentage of revenue in which a lower number is better, fell to a record 58.9 per cent for a first quarter, down from 65.7 per cent a year ago.

Meanwhile, CN said weaker than expected freight demand in certain markets and the strengthening of the Canadian dollar relative to the U.S. dollar have prompted a downward revision to CN’s 2016 financial outlook.