$27-billion Airbus project was about $6.6-billion over budget, three years behind schedule

PARIS—France has become the first country to receive an A400M military transport plane from Airbus, bringing to fruition a long-troubled program.

The delivery culminates “a long, complex and thorough process” between Airbus Military and the seven European nations behind the program, France’s DGA military procurement agency said in a statement.

Civil and military flight certifications, performance verifications and checks of the plane in recent days paved the way for the delivery.

A decade in the making, the $27-billion project was about $6.6-billion over budget and three years behind schedule.

In 2010, the program nearly collapsed over cost overruns: A struggle between Airbus and its military customers over technical and financial problems came to a head when Airbus parent EADS threatened to pull the plug on the project.

The plane was salvaged only after a new infusion of government funds.

“Today is a truly historic day for the European aerospace industry—marking the moment at which it becomes the new global leader in the military transport sector with an entirely new aircraft,” said Domingo Urena, chairman and CEO of Madrid-based Airbus Military, in a separate statement.

Airbus Military spokeswoman Maggie Bergsma said the A400M is aimed to fill “a gap in the market.”

She said two more planes are to be delivered to France and one to Turkey this year. 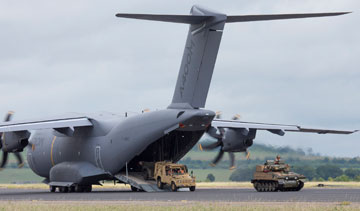 The European defence and aerospace consortium expects to sell about 400 A400M military freighters over the next 30 years as air forces around the world look to replenish their aging fleets. PHOTO Airbus

Airbus says the A400M, which uses the largest turboprop engines ever fitted to a Western aircraft, will be able to carry twice the load of another competitor, the Lockheed C-130 Hercules, and that its fuel-efficient power plants will make it cheaper to operate than the jet-powered C-17.

The A400M’s turboprops, mounted high on the wing, allow it to fly in and out of unprepared airstrips where jet-powered transports with engines slung low beneath the wings face the danger of ingesting runway debris, Airbus says.

The European defence and aerospace consortium expects to sell about 400 of the freighters over the next 30 years as air forces around the world—particularly in the Middle East—start replacing their transport aircraft.

European nations have long been hampered by the shortfall in strategic military airlift capabilities.

In the 1990s, they struggled to deploy forces to nearby trouble spots in Bosnia and Kosovo without using United States Air Force transports such as the Boeing C-17 Globemaster III.