Company says earnings would have reached $174M without tax increase 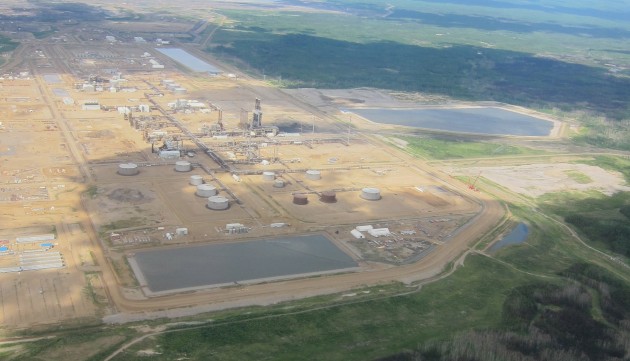 Canadian Natural Resources Limited pointed to a 20 per cent increase in the corporate tax rate as the cause of its quarterly loss. The rate rose 2 points to 12 per cent in June. PHOTO: The Interior, via Wikimedia Commons

CALGARY—Canadian Natural Resources Limited announced a loss of $405 million for the second-quarter of 2015, and the company did not mince words over why its books were steeped in red ink

“During the second quarter, absent the impact of the $579 million charge due to the 20 per cent increase in Alberta corporate income tax rates, our earnings would have been $174 million,” CFO Corey Bieber said in a statement. “This charge effectively translates into lower future cash flows and therefore, lowers reinvestment in the business.”

“Based upon third party research, this lower future capital reinvestment likely equates to about 4,100 fewer person years of direct, indirect and induced employment, with follow-on impact of higher income taxes on future income streams,” he added.

Alberta’s 2 per cent corporate tax hike was introduced in June by the recently-elected NDP government and raised the province’s tax on businesses to 12 per cent.

President of CNRL, Steve Laut, said that while commodity prices have been challenging, the company remains in a strong position.

“Our strong, diverse and well balanced asset base, and the effectiveness of our strategies, combined with our ability to execute these strategies, allows us to react quickly in this challenging commodity price environment,” he said.

Laut also pointed to CNRL’s achievement of “significant cost savings” through better effectiveness, efficiency and innovation. He noted both operating and capital costs were down significantly from a year ago.