The Canadian version of Air Force One, an aging Airbus 310-300 used to transport the PM and the Governor General, has been experiencing mechanical problems recently. Estimates to replace Can Force One and a fleet of military transports range between $500 million and $1.5 billion 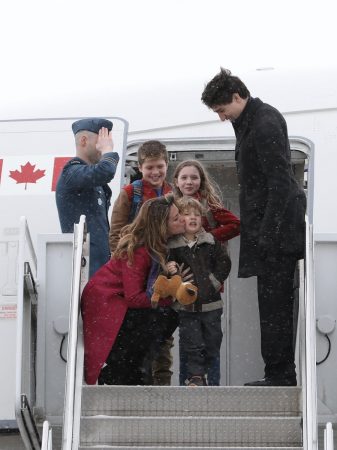 Prime Minister Justin Trudeau and his family exit Can Force One, an aging plane that delayed the PM enroute to important appointments in India and Belgium. PHOTO: CanadianPM Twitter

OTTAWA—Canada’s “flying Taj Mahal” is getting long in the tooth and may be in line for replacement.

The 31-year-old plane, used to transport the prime minister and the Governor General around the world, almost made Justin Trudeau late to see the real Taj Mahal last month after a mechanical issue during a refuelling stop in Rome delayed his flight to India.

It was the latest in a string of mechanical problems plaguing the plane, including a flap issue in October 2016 that required the aircraft return to Ottawa 30 minutes after taking off with Trudeau on board en route to Belgium to sign the Canada Europe free trade deal.

The Rome problem involved a damaged sensor that had already been repaired at least once. The refuelling stop lasted almost three hours instead of the normal 90 minutes.

The VIP aircraft, an Airbus 310-300, is one of five planes in the Royal Canadian Air Force’s fleet of CC-150 Polaris military transport planes that were originally bought by Wardair for commercial flight use in 1987 and then purchased by the air force in 1992.

Four of the planes are used as military transports and two are capable of refuelling CF-18 fighter jets in flight. The fifth is used for VIP flights, including bringing the Queen to and from Canada when necessary.

A senior government official says the government is studying whether it’s time to replace the aging fleet.

“Are the planes getting old,” she asked. “Yes. Are we taking a look at renewing the fleet? Yes.”

A 2016 Department of National Defence work plan says it will cost between $500 million and $1.5 billion to replace the Polaris CC-150 fleet. An analysis of the options is to be completed this year and the new planes delivered between 2026 and 2036.

A decision can’t be made on the Polaris replacements until Canada has made a choice on its new fighter jets, since the mid-air refuelling planes would have to be compatible with the new fighter jets.

Byrne Furlong, press secretary to Defence Minister Harjit Sajjan, said the government is continuing to extend the life of the CC-150s by balancing their use.

“Our government is committed to providing the Royal Canadian Air Force with the critical equipment it needs to be fully operational, now and in the future,” she said.

The VIP plane—known officially as Can Force One—was saddled with the Taj Mahal nickname by former Liberal leader Jean Chretien when, as Opposition leader in 1992, he objected to the cost of buying and turning the Airbus into a flying office for the prime minister. The $56 million price tag at the time included about $3 million to install a private compartment with a dining room, entertainment area, fold-out beds and a shower.

After he was elected prime minister, Chretien never flew on the plane. Attempts to sell it were unsuccessful and eventually the interior was downgraded to a smaller, less lavish VIP cabin that is still in use today. It has a bed, and small sitting room and limited communications capacity.

The power supply for government staff and journalists travelling along comes in the form of extension cords and power bars strung all along the cabin floor. There is no Wi-Fi and the prime minister’s communication with the ground while in flight is spotty and expensive.

The plane itself is far less fuel-efficient than more modern alternatives and its flying range is limited, sometimes requiring multiple refuelling stops.

The planes undergo heavy maintenance every six years. The last time was in 2013, when the ashtrays were finally removed from the seats, and it got a new coat of paint. That latter decision was heavily criticized when then-prime minister Stephen Harper’s office made specific requests about colour and design that many said were very similar to the Conservative party colours.

The United States is in the midst of renewing its Air Force One fleet. President Donald Trump this week said the government had signed a deal with Boeing worth $3.9 billion for two new 747s.