The 1.3-kilometre suspension bridge, which was "redecked" in sections on evenings and weekends, has been worn down by about 34 million crossings per year since 1955 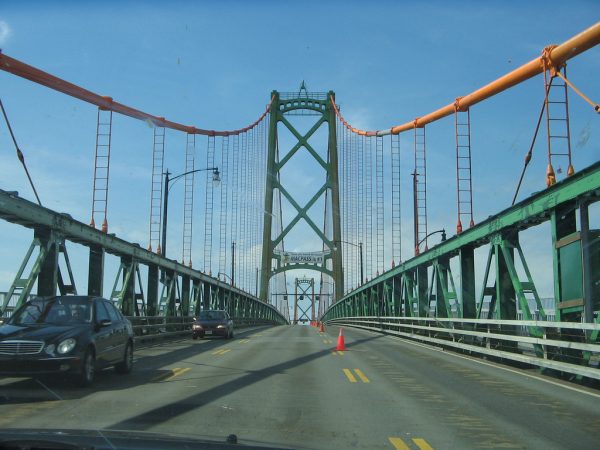 The Angus L. MacDonald bridge connecting Dartmouth and Halifax in Nova Scotia was rennovated in 20-metre sections over the course of two years. PHOTO: zmh, posted to flickr

HALIFAX—A roughly 10 metre segment hung in the fog over Halifax Harbour on Feb. 26 to fill the 46th and final gap in the decades-old MacDonald Bridge in time for tens of thousands of cars to cross the bridge Monday morning.

On most days since 2015, when the workday ended, construction on the Macdonald Bridge started. The 1.3-kilometre suspension bridge has been refitted piece by piece with almost an entirely new deck over the span of almost two years while still allowing people to commute between Halifax and the city’s sprawling suburbs from dawn to dark on weekdays.

The redecking phase of the “Big Lift” project on the Macdonald Bridge marked the second time that an entire suspended structure has been replaced while allowing about tens of thousands of crossings on an average workday since the redecking process was pioneered on the Lion’s Gate Bridge in Vancouver more than a decade ago, according to a spokesperson for the authority that manages the bridges in Halifax.

“People have described this as a once-in-a-lifetime kind of project,” said Alison MacDonald of Halifax Harbour Bridges.

“It’s an engineering feat, no doubt about it. We are essentially taking the bridge apart every weekend and then putting it back together for people to drive over the next morning.”

Since 2015, the bridge has been closed periodically on weekends while crews spliced the suspended structure into about 10 to 20-metre-long sections that were lowered onto trucks or barges in the harbour. New deck segments were swapped in with lifting gantry to close the hole in the bridge before rush-hour traffic.

“We’re thrilled to have reached this milestone,” says MacDonald. “It’s a source of pride for people in the city that we’ve managed to pull off a project of this scope.”

Known locally as “the old bridge,” the Macdonald Bridge is one of two structures linking Halifax and Dartmouth. The suspension bridge has been worn down by about 34 million crossings per year since its 1955 construction, says MacDonald, leading to concerns that the corroding floor beams could pose a safety risk in the future.

The provincial government issued a more than $200-million loan to refurbish the bridge, which MacDonald says will be paid back through toll fares.

The redecking phase of the construction project was originally scheduled to be completed last fall but progress has been stalled by heady winds and poor weather, says MacDonald.

“The bridge is at its most vulnerable when there’s a hole in it, so wind was our enemy in this project,” says MacDonald. “When it rains, it rains sideways … At time we had to stop work because it wasn’t safe to do so.”

MacDonald says this weekend’s “major milestone” should bring an end to routine weekend closures, but the bridge will still be shut down from 7:00 p.m. to 5:30 a.m. Sunday through Thursday as work continues on other parts of the span.

Pedestrians who have been forced to use a shuttle service since the bridge’s sidewalks and bike lanes were closed last summer should be able to cross without a car some time next month, she says.

The next tasks include replacing the floor beams beneath the deck and suspension cables as well as dehumidifying the bridge’s main cable, according to MacDonald. When the project wraps up this fall, MacDonald says commuters are in for a much smoother drive on their way to work.