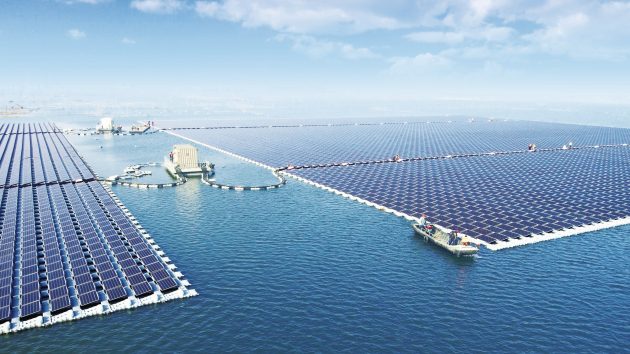 The floating farm has been built on a lake created by subsidence and heavy rain. Photo: Sungrow

HEFEI, China—Sungrow, a Chinese photovoltaic inverter manufacturer, announced on May 18 that the world’s largest floating solar farm had been connected to the grid in Huainan, China.

Sungrow says the solar farm, situated in the coal-rich city in China’s eastern Anhui province, has a 40 megawatt capacity, and is located in a mining area transformed into a lake by subsidence and heavy rain, with water depth ranging from four to 10 metres.

Sungrow’s central inverter unit SG2500-MV was used in the project, as were its combiner boxes.

The SG2500-MV inverter system—which transforms direct current from solar panels into alternating current that can be sent to the grid—houses an inverter, a transformer and a switchgear in a single unit called a turnkey station.

Sungrow says the combiner boxes used in the Huainan project—which combine power from multiple solar panels and deliver it to the central inverter system—are customized for floating solar farms, and can work safely in environments with high humidity and salt spray.

“Introducing cutting-edge technologies to products is what we are always committed to. We continue to offer better products and solutions to customers all over the world,” said Renxian Cao, president of Sungrow.

Sungrow has built its reputation as a solar power inverter systems manufacturer, controlling 10 per cent of the world’s market share, but the company recently started developing its own solar projects.

PV-Magazine reported in November 2015 that Sungrow had reached an agreement with a local government in the Anhui province, near its headquarters in Hefei, to develop 600 megawatts of solar plants in the region, an investment worth US$939 million.

A 20 megawatt floating solar farm, developed and operated by Chinese solar glass producer Xinyi Solar, went into operation in the same area as the Sungrow project in April 2016. Xinyi Solar’s farm was said to be the largest of its kind at the time.

Similar large-scale floating solar farms have been developed in the U.K., Japan and a handful of other countries.

Floating solar farms can reduce water evaporation and restrain the growth of algae. Water can also cool down modules and cables, improving the efficiency of power generation. These farms also have the added advantage of not taking up valuable land, which is of particular benefit to developers in densely populated regions around the globe.