Dutch company PAL-V is taking orders for its propeller-controlled flying car, the Liberty, starting at $399,000 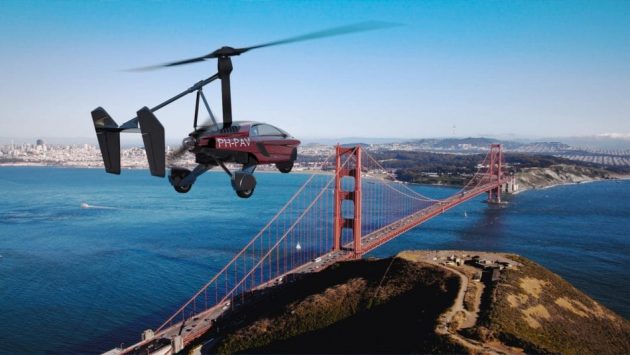 The PAL-V Liberty is compliant with U.S. and European aviation regulations PHOTO: PAL-V

The launch follows successful test programs of PAL-V’s concept vehicles in 2009 and 2012.

The PAL-V Liberty generates lift with a wind-powered rotor, and makes turns on a tilting gyroscopic axis.

While airborne, this two person vehicle has a max operating altitude of 3500 metres, a max speed of 180 km/h, a fuel efficiency of 26 litres per hour and a fuel range of 500 km. It can stay in the air for 4.3 hours.

The Liberty also operates as a road vehicle that is small enough to fit in parking garages with low ceilings.

PAL-V asserts that these cars are safe and easy to operate, and meet the legal standards of the European Aviation Safety Agency and the Federal Aviation Administration (U.S.).

PAL-V says that most countries acknowledge U.S. and European regulations on flying car travel, or have similar certifications of their own. PAL-V is planning to certify their vehicle in every country in the world.

“Later in 2017 we will start building a preproduction series, followed by the manufacturing of the first PAL-V Libertys for our early ‘pioneer’ clients. Deliveries of road and air certificated models are scheduled by the end of 2018. This truly is a pivotal time in aviation and mobility history,” said Robert Dingemanse, CEO of PAL-V.

The Liberty has been introduced to selected clients in Canada, the U.S., Mexico and Bermuda. With sales going public, PAL-V expects interest to rise.

“We are very pleased with the response so far. Now that the new design is public, I expect to see an even greater interest stemming from North America, which has a propensity for early adoption in innovative products,” said Mark Jennings-Bates, PAL-V VP of Sales, North America.

For those who have some money burning a hole in their pocket, a pilot’s licence is required to drive a PAL-V Liberty, in addition to a driver’s licence.