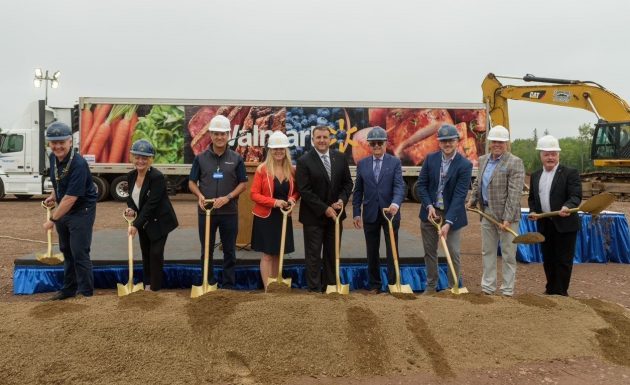 Walmart Canada broke ground on Aug. 19 on its first distribution centre in Atlantic Canada – a 223,000-square-foot facility in Moncton, New Brunswick, which is slated to open in fall 2022.

The new distribution centre, to be located at 135 Frenette Ave., will provide fresh and frozen groceries to 43 Walmart stores in Atlantic Canada, Walmart officials said in a news release.

“This project will strengthen the local economy, creating more than 200 jobs in Moncton and surrounding communities, including more than 100 jobs inside the distribution centre,” Walmart Canada officials said. “The distribution centre, which sits on nearly 19 acres of land, will emphasize environmental sustainability by reducing long-haul truck deliveries and removing millions of kilometres from the supply chain each year.”

The retailer said it plans to invest over $56 million in the project, part of a $3.5 billion investment into all aspects of the business over five years.

“We are thrilled to welcome Walmart to one of Moncton’s Industrial Parks,” said Moncton Mayor Dawn Arnold. “This is another great addition that will bring jobs to the City and contribute to the three-year streak of record-breaking land sales and development for Moncton Industrial Development. Walmart Canada is another client that has demonstrated their confidence in our city as the hub for business expansion in Atlantic Canada.”

The Moncton facility is one of three Walmart Canada distribution centres currently under construction; the other two are in Surrey, B.C. (opening in 2022) and Vaughan, Ontario (opening in 2024).