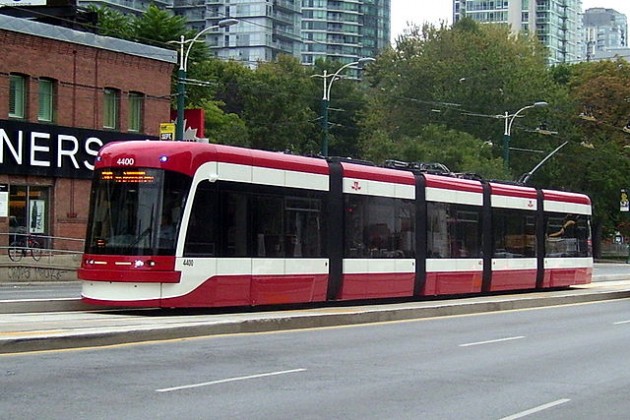 Toronto’s new streetcars. Of the 67 scheduled to be in operation by Oct. 2015, Bombardier has delivered only 10. PHOTO: Robert Taylor, via Wikimedia Commons

TORONTO—The union representing about three-quarters of the 1,200 employees at Bombardier Inc.’s Thunder Bay facility, which is building the Toronto Transit Commission’s new streetcars, is calling for calm in a deepening spat between the public transportation agency and Bombardier’s Transportation division.

With new delays to the delivery schedule for its new streetcars announced earlier this month, the TTC’s CEO, Andy Byford, and chair, Josh Colle, went on the offensive, threatening to sue Bombardier, which has delivered only 10 of the 67 streetcars that were originally scheduled to be in operation today.

“I am incredibly disappointed to learn that Bombardier, yet again, will not be meeting their commitments to deliver new streetcars to Toronto,” Colle said earlier this month. “They have let down the TTC, our customers, the good workers in Thunder Bay, and all Toronto residents. We will not let Bombardier’s incompetence hold our patient and loyal customers hostage. We will consider all legal and financial actions at our disposal to address this situation.”

As the continued delays dictate sentiment within the TTC and at Toronto City Hall, Unifor is calling for calm and expressing its commitment to working with all parties to resolve the concerns surrounding the delay. The union also stressed that the issue must be addressed without putting well-paying Ontario jobs at risk.

“We are eager to ensure Bombardier’s success,” Andy Savela, Unifor national staff representative, said. “At a time when Canada is fighting hard to protect and create good-paying jobs, we need to ensure we do all we can to maximize the benefits that result from Bombardier Transportation’s significant operations in Ontario.”

The union noted Bombardier Transportation employs 2,200 highly-skilled employees in the province and has over 1,000 suppliers.

“Unifor is optimistic that there are ways to improve productivity. We have some innovative ideas and are discussing those with the company,” Savela said.

Meanwhile Unifor also acknowledged the TTC’s concerns and the need to address them. The union said it is “optimistic” Bombardier, the TTC and the provincial government can find a way to address the delays and “secure a bright future for Bombardier.”

“We’re asking that those concerns be addressed in a manner that does not undermine the long-term economic benefits that come from the success of Bombardier Transportation,” Unifor said.