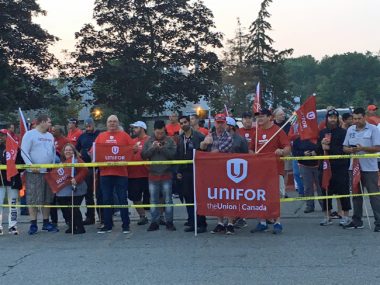 The union set up a picket line at the Milton, Ont. plant at 4 a.m. Aug. 10. PHOTO: Jerry Dias/Twitter

MILTON, Ont.—Unifor has taken control of the Northstar Aerospace facility in Milton, Ont., demanding that the company fund a 24 per cent pension deficit before the plant closes in September.

The union said the move follows an abrupt Northstar decision to relocate equipment at the Milton facility to Chicago and Windsor, Ont., as a result of a lost Boeing contract.

“This action sends a clear message to Northstar that the company cannot short-change workers and the pension of retirees that have made it profitable for so many years,” said Jerry Dias, Unifor’s national president.

While losing the contract makes avoiding closure difficult, the union said there is no financial excuse not to supplement the pension plan in order to protect future and current retirees.

The plant’s impending closure came as a surprise to the facility’s 200 employees. Prior to the announcement, Northstar workers were told that the Milton operation was on solid footing, Unifor said.

Northstar, which builds a range of gears, shafts, and rotor heads at the Milton plant, previously filed for protection under Chapter 11 in the U.S. and Companies’ Creditors Arrangement Act in Canada in 2012, but was acquired by private equity firm Wynnchurch Capital several months later.

Since January 2017, the union’s Local 112 has attempted to negotiate a closure agreement to protect current pension provisions and benefits, but Unifor alleges Northstar’s owners won’t talk.

“We have stopped production at this facility until Northstar holds up its end of a commitment, a commitment to the workers who have made this company flourish,” said Scott McIlmoyle, president of Unifor Local 112. “After months the company has refused to discuss the matter. Time is running out. Northstar needs to do the right thing.”

The union says the 24 per cent pension cut translates to $211 less per month for the average retiree. However, because of the type of pension plan in place, the company is under no legislative obligation to fund the plan.

Unifor members and supporters set up a picket line outside the facility at 4 a.m. Aug. 10 and have vowed to demonstrate around the clock.