Unifor rallies at Northstar Aerospace plant in Milton, Ont., one month after takeover

The union continues to call on the company to fund a pension deficit, weeks after a cease and desist order ended a three-day occupation at the facility 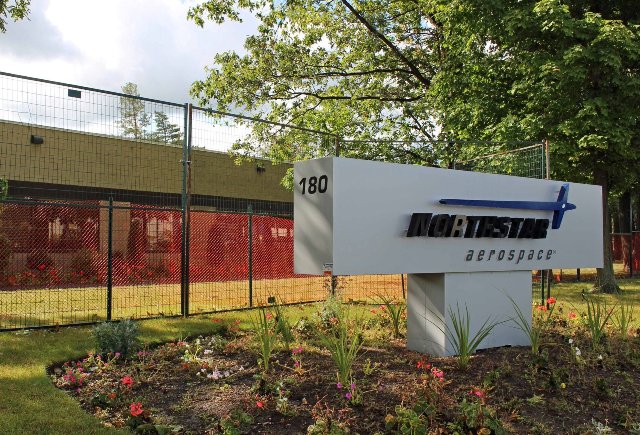 The Northstar plant is scheduled to close by the end of the month. The company has erected fences outside the site after last month’s occupation. PHOTO: Unifor/Twitter

Union members and supporters rallied outside the Milton manufacturing plant Sept. 7, demanding the company fund a 24 per cent pension shortfall for Northstar retirees before the plant closes at the end of the month.

The rally follows a demonstration outside the Wynnchurch Capital office in downtown Toronto earlier this week and a three-day takeover at the Northstar plant in August, which halted production and ended only after a cease and desist order was issued.

Unifor said about 200 people gathered outside the plant Thursday afternoon.

Northstar—officially known as Heligear Canada Acquisition Co.—has been unmoved by the demonstrations. It maintains the company’s pension has been underfunded since Wynnchurch acquired the company in 2012 and has refused to meet Unifor’s demands to top-up the fund.

“Heligear has made every payment required in its negotiated collective agreement with the union which also requires the company to make a final lump sum payment,” Greg Harper, vice-president of human resources, said in a statement during last month’s takeover.

“Heligear has not proposed any reduction of pension benefits. Any reduction or shortfall is a function of the plan management and design, which are not within Heligear’s control.”

Unifor acknowledges the company is not legally obligated to add funds to remedy the pension deficit, but says it has the financial resources to do so and is ethically obligated to support its workers.

The shortfall will result in approximately $211 less per month for retirees, Unifor says.

The Northstar plant is scheduled to close by the end of the month, but the union has vowed to keep up the pressure.

“This fight is not over. It’s just starting,” Naureen Rizvi, Unifor’s Ontario Regional Director, said in a statement.