Toyota said it expects to make about 175,000 unspecified vehicles with Takata inflators; Some 2016 and 2017 models from four automakers reportedly have the faulty inflators, yet currently aren't under recall and thus can be sold legally; NHTSA has said there are 85 million unrecalled Takata inflators in U.S. vehicles 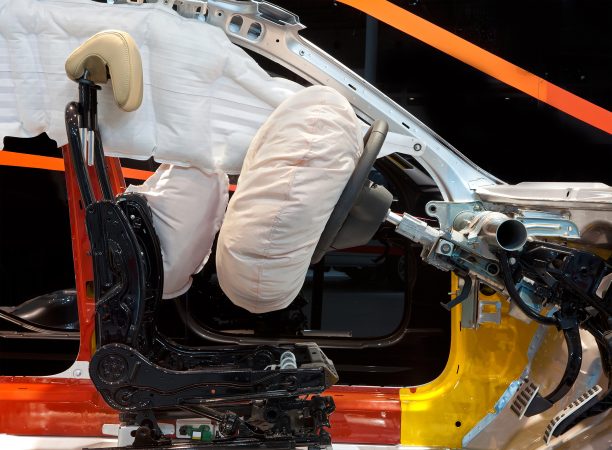 Takata inflators can deteriorate over time when exposed to moisture and high temperatures. Stock image

The report by the U.S. Senate Committee on Commerce, Science, and Transportation says some 2016 and 2017 models from Fiat Chrysler, Mitsubishi, Toyota and Volkswagen have a type of inflator that is prone to rupture and presents a potential danger to drivers and passengers.

Takata inflators can deteriorate over time when exposed to moisture and high temperatures. Takata has agreed to recall original equipment inflators that lack a drying agent in phases by the end of 2018.

Sen. Bill Nelson of Florida says the automakers should replace the inflators before the cars are sold so they don’t eventually have to be recalled. But the cars currently aren’t under recall and can be sold legally.

UPDATE (June 2, 2016):
“Consumers are buying new cars not realizing that they’re going to be recalled,” said Sen. Bill Nelson of Florida, the Commerce committee’s top Democrat. Nelson wants the automakers to replace the inflators before the cars are sold so they don’t have to be recalled.

The problematic inflators contain ammonium nitrate, which can deteriorate over time when exposed to moisture and high temperatures. The National Highway Traffic Safety Administration has said that its tests show it takes at least six years before the inflators pose a danger.

Takata Corp. has agreed to recall all original equipment inflators that lack a chemical drying agent in phases by the end of 2018. So far, the recall affects 17 car and truck companies, with vehicles going back to the 2000 model year.

At least 11 people have been killed worldwide by Takata’s inflators. Two other deaths in Malaysia are under investigation.

Mitsubishi and Volkswagen identified the new models that have Takata inflators without the drying agent. They include the 2016 Volkswagen CC, 2016 Audi TT, 2017 Audi R8, and the 2016 and 2017 Mitsubishi i-MiEV. Toyota and Fiat Chrysler did not specify models.

According to the report, Toyota said it expects to make about 175,000 unspecified vehicles with Takata inflators that don’t have the drying agent from March 2016 to July 2017. Toyota said it’s phasing out those inflators, but a spokesman didn’t know by what date.

Fiat Chrysler has only one new model with the inflators, which spokesman Eric Mayne declined to identify. “These vehicles are not currently subject to recall. They meet or exceed all applicable safety requirements,” Mayne said in an email.

The Democrats’ report says completion rates for the Takata recall remain low. As of March, Honda led with almost 40 per cent of inflators replaced, while Daimler Vans had completed only 0.4 per cent.

NHTSA said in a statement that it has called on automakers to do more to notify vehicle owners and speed up replacement of the Takata inflators.

The report also says that a majority of replacement inflators that have been installed, about 4.6 million, are made by Takata and use ammonium nitrate. At least 2.1 million of those don’t have the drying agent and will have to be recalled again.

NHTSA has said there are 85 million unrecalled Takata inflators in U.S. vehicles, some with and some without the drying agent. Takata has until the end of 2019 to prove that inflators with the drying agent are safe, or they must be recalled as well.