May's "Chequers plan'' aims to keep the U.K. in the EU single market for goods, but not services, in order to ensure free trade with the bloc 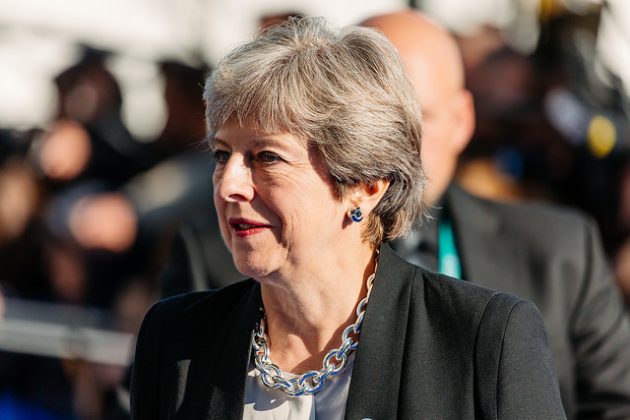 LONDON – The British government on Friday accused the European Union of slamming the handbrake on Brexit negotiations, after the bloc said Prime Minister Theresa May’s blueprint was unworkable.

European Council President Donald Tusk said bluntly at a meeting in Salzburg, Austria on Thursday that parts of May’s plan simply “will not work,” while French President Emmanuel Macron called pro-Brexit U.K. politicians “liars” who had misled the country about the costs of leaving the 28-nation bloc.

A rattled May insisted that her plan was the only one on the table – and that Britain was prepared to walk away from the EU without a deal if it was rejected.

The rebuff sparked British headlines saying May had been “humiliated,” and a strong response from the U.K. government.

Brexit Secretary Dominic Raab accused the EU of rejecting Britain’s proposals without offering “credible alternatives” and said the bloc had “yanked up the handbrake” on negotiations.

“For the negotiations to go forward they’re going to have to take their hand off the handbrake,” he said.

May’s Downing St. office said the prime minister would make a televised statement on the Brexit talks on Friday afternoon. There was no indication of what she planned to say.

The rocky summit dashed British hopes of a breakthrough in stalled divorce talks, with just six months to go until Britain leaves the bloc on March 29.

The judgment of British newspapers was brutal. The broadly pro-EU Guardian said May had been “humiliated.” The conservative Times of London said: “Humiliation for May as EU rejects Brexit plan.”

Despite all the heated British rhetoric, the EU’s position is not new. May’s “Chequers plan” – named for the prime minister’s country retreat where it was hammered out in July – aims to keep the U.K. in the EU single market for goods, but not services, in order to ensure free trade with the bloc and an open border between the U.K.’s Northern Ireland and EU member Ireland.

EU officials have been cool on the plan from the start, saying Britain can’t “cherry-pick” elements of membership in the bloc without accepting all the costs and responsibilities.

Yet British politicians and diplomats were taken aback by Tusk’s blunt dismissal of the Chequers plan on Thursday – and by his light-hearted Instagram post showing Tusk and May looking at a dessert tray and the words: “A piece of cake, perhaps? Sorry, no cherries.”

Miller said the EU had “made it very clear where they stand and the U.K. has been so focused on its own infighting that they actually have not been listening.”

“How can (May) have been so badly advised? It stinks of incompetence, the whole thing, when the moment of reality is only four weeks away,” Miller told the BBC.

Tusk said Thursday that an EU summit on Oct. 18 and 19 would be the moment of truth, when an agreement on divorce terms and the outlines of future trade would be sealed, or would fail.

The biggest single obstacle to a deal is the need to maintain an open Irish border. Failing to do so could disrupt the lives of people and business on both sides, and undermine Northern Ireland’s hard-won peace.

Britain and the EU have agreed on the need for a legally binding backstop to guarantee there is no return to customs posts and other border checks. But Britain rejects the EU’s proposed solution, which would keep Northern Ireland inside the bloc’s customs union while the rest of the U.K. leaves.

May said that would “divide the United Kingdom into two customs territories.” She said Britain “will be bringing forward our own proposals shortly” about how to break the impasse.

Dealing with the EU is only part of May’s problem. Her Chequers plan also faces opposition from pro-Brexit members of her own Conservative Party, including former Foreign Secretary Boris Johnson, who say it would keep Britain tethered to the bloc, unable to strike new trade deals around the world.

The Salzburg summit has given them new energy. When the Conservatives meet for their annual conference on Sept. 30, they plan to push for May to ditch the Chequers plan, or face a challenge to her leadership.

Pro-EU politicians don’t like the Chequers plan either, saying it will cut the U.K.’s vast services sector out of the single market.

Conservative lawmaker Stephen Crabb said that May – assailed from all sides – should keep her nerve.

“The first rule is, don’t panic,” he told the BBC. “One of the outcomes the EU leaders wanted from yesterday was for Britain to go away, push the panic button and re-think, but the prime minister needs to stick to her guns.”