Union looks for court order of its own to stop 'reprehensible' U.S. Steel plan 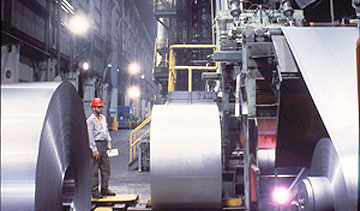 The USW is calling on the government to “step up” and defend Canadian workers and communities. PHOTO: U.S. Steel

TORONTO—U.S. Steel Canada announced late Sept. 17 it would seek a court order to extend its protection from creditors into 2016. The U.S. steel giant’s Canadian arm said it would unlikely be able to continue operations at its Hamilton and Nanticoke plants if it did not receive the order from the Ontario Superior Court of Justice. As part of the order, USSC is seeking to suspend all pension payments and healthcare for its retirees. It has also said it will move production of steel for the auto industry out of Canada to the U.S.

The United Steelworkers union is hitting back, however, condemning USSC’s “threat” to suspend pension plan contributions and crucial benefits for retirees. The USW is seeking a court order of its own to stop U.S. Steel’s reallocation of Canadian production to the U.S.

“U.S. Steel has hit a new low with its latest threats to our Canadian operations and its obligations to our workers, pensioners and communities,” USW Ontario Director Marty Warren, said.

“We contend U.S. Steel’s plans are illegal and we are urging the courts to stop them in their tracks,” Warren added.

USW says the company’s plan violates a court order for USS to maintain services and production “in a manner consistent with existing arrangements and past practice,” which is part of USSC’s court-supervised bankruptcy protection.

“The potential for the success of the restructuring process is significantly adversely affected by the threatened loss of production, and the resulting instability, loss of revenue, and the heightened risk of damage to mill equipment, among other things,” the USW says in a motion filed with the Ontario Superior Court judge overseeing the bankruptcy protection case.

The union took specific notice of the company’s position on retirees’ pensions and health benefits.

“It is particularly despicable that the company is attacking the most vulnerable in our community by threatening to suspend pensioners’ health, medical, dental and life insurance benefits,” Gary Howe, president of USW Local 1005 in Hamilton, said.

The USW called on the government to “step up and defend Canadian workers and pensioners and help reverse eight years of damage U.S. Steel has inflicted on our communities.”