by Josh Boak And Hannah Fingerhut, The Associated Press  March 11, 2020 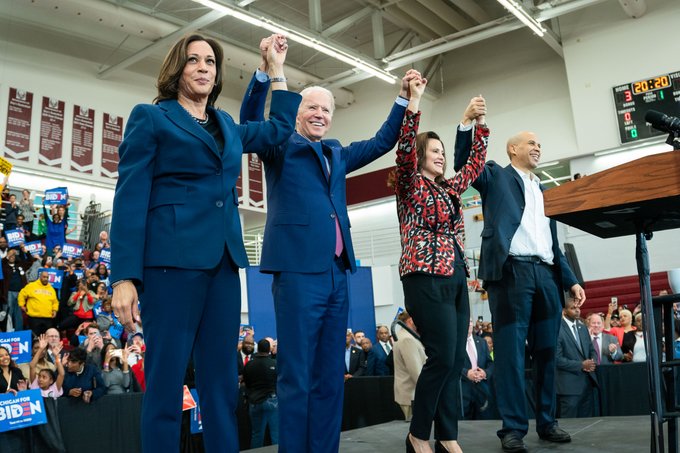 WASHINGTON — Joe Biden went into the March 10 primaries riding a wave of voter confidence about his chances of victory in November — and that propelled him to wins in Michigan, Missouri and Mississippi.

Democratic primary voters in those states were more likely to think the former vice-president could defeat President Donald Trump in the general election, compared with Biden’s top rival, Vermont Sen. Bernie Sanders, according to AP VoteCast surveys of voters.

The Associated Press also called Biden the winner in Idaho.

The surveys showed Biden built a coalition that crossed the spectrum of Democrats. African Americans and older voters continued to be a reliable foundation of support for Biden. He also drew support from blue-collar workers, rural voters, city dwellers, women, the highly educated, moderates, conservatives and even the “somewhat liberal,” according to AP VoteCast.

Sanders, meanwhile, preserved his strength with voters younger than 30 and those who consider themselves “very liberal.” But he failed in his push to drive up turnout among those groups and couldn’t overcome the concerns of moderate and conservative Democrats who are focused first and foremost on expelling Trump from the White House.

AP VoteCast surveys are designed to capture voters’ views regardless of when or how they voted, accounting for the many voters in Michigan and other states who voted early. Here’s a look at voters’ opinions as they cast their ballots in half of the six contests on March 10.

Voters generally view Biden as the better match against Trump. About 80% in Michigan and Missouri believe Biden could beat the incumbent, while roughly 90% in Mississippi feel that way. Just about 60% of voters in each state think Sanders would be likely to defeat the incumbent president.

Still, there is some notable indecision among primary voters about whom they’ll cast a ballot for in November. Roughly 80% in each state say they will definitely vote for the Democratic candidate against Trump no matter who is nominated. But close to 20% say their decision depends on which candidate becomes the nominee.

In Michigan, a state that flipped Republican in 2016, those undecided voters looked more like potential Trump voters than liberals unhappy with the prospect of a Biden nomination. Among voters saying their November decision depends on the nominee, about 2 in 10 describe themselves as conservative and roughly half say they are moderate. That’s largely true in Republican-leaning Missouri as well.

In the Democratic presidential contests, it’s all about what women want.

About 60% of Democratic primary voters in Michigan, Missouri, Mississippi were women. This fits a pattern in most states where a firm majority of voters are women. This has helped boost Biden, who has beating Sanders among women voters.

Other key Democratic demographics showed up for Biden on March 10. In Mississippi, about 70% of voters were African American, and Biden won 86% of their votes, compared with Sanders’ 11%. About 70% of Mississippi voters described themselves as moderate or conservative, another base of Biden support.

THE YOUNG AND THE RESTLESS

Sanders still gets love from voters under 30, but he has not delivered on his strategy of getting them to the polls.

He won 72% of this group in Missouri and 65% in Michigan. But the under-30 crowd was just 14% of voters in Missouri and 13% in Michigan — about the same share as in previous primaries contests. In other bad news for Sanders, he showed no particular strength with voters age 30 to 44, typically a larger share of the vote than the very young.

In all three states, older voters dominated. At least 60% of voters were 45 and older, a group Biden has won over handily.

Both Biden and Sanders have claimed to be the working-class candidate. On March 10, Biden assembled a coalition that could back him up.

Biden’s strength among voters without a college degree crossed race and gender, suburbs and cities. Only young people defied the trend. Sanders appeared to beat Biden with voters under 45 who don’t have a college degree.

YOU SAY YOU WANT A REVOLUTION

Voters in New Hampshire and Iowa wanted to change the U.S. political system. That turned out to be an outlier as the nomination battle spread to other states.

In the opening two contests, about two-thirds of voters wanted a Democratic nominee who would transform the government, compared with roughly a third who would rather return to a time before Trump. But as Biden climbed to the pole position, the answers to this question have shifted. Voters were about evenly split on the question of change versus restoration, or even leaned more toward a restoration of the way things were, as in Mississippi.

WHERE IS THE ENTHUSIASM?

Even if Democratic primary voters like their odds in November, enthusiasm isn’t overwhelming. Just about half of voters in Michigan and Missouri and roughly two-thirds in Mississippi say they are very enthusiastic about the candidate they are supporting in the primary. In all three states, roughly a third are somewhat enthusiastic. As many as 1 in 10 expressed little to no enthusiasm.

In Missouri and Michigan, Sanders’ supporters are more enthusiastic than Biden’s. About two-thirds of Sanders’ voters said they were very enthusiastic about supporting their candidate, compared with about half of Biden’s supporters saying the same.

Despite fears that the coronavirus could stop the longest economic expansion in U.S. history, there does not yet appear to be a spike in voters’ concern about the economy. Just about 1 in 10 voters in Missouri said the economy was the most important. Only 17% in Michigan described the economy and jobs as most critical, roughly comparable to the share saying that of climate change.

In Mississippi, where a majority of voters were African American, about a quarter viewed the economy as the top issue. That’s about the same share as in Alabama, which voted last week.

Health care was the top issue for voters in all three states, as it has been in other Democratic presidential contests. Close to half of voters in Missouri, and about 40% of voters in Michigan and Mississippi, name health care the top priority.

Still, economic inequality is a key concern for Democrats.

Roughly three-quarters of voters in each state consider the economic system in this country to be unfair, similar to Democratic voters in contests earlier this year. Many — a third or more — call the system “very unfair.”