One expert says making economic peace with the EU, Mexico and Canada could give Trump "some breathing room on China and signal to the world that they aren't looking to fight with everyone" 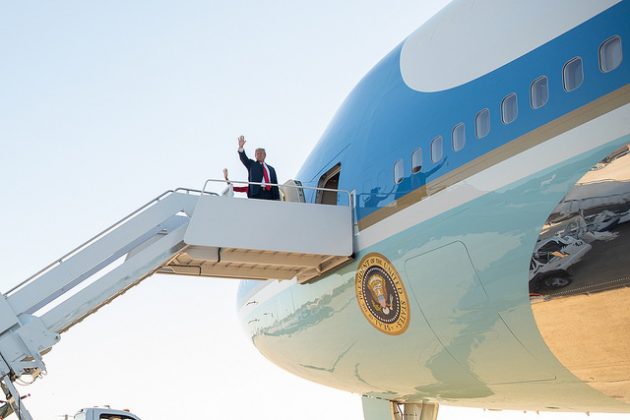 The mercurial U.S. president is running out of reliable friends, as his sandpaper style of diplomacy has alienated traditional allies. PHOTO: The White House/Flickr

WASHINGTON—Gathering strength for a brutal trade war with China, the United States appears to be trying to patch things up with its friends.

U.S. and Mexican negotiators are meeting in Washington Thursday and Friday to work on a rewrite of the North American Free Trade Agreement—an effort that looked virtually dead a few months ago. And last week President Donald Trump announced a cease-fire in a potentially destructive dispute with the European Union over trade in cars, trucks and auto parts.

Meanwhile, the Trump administration ratcheted up the pressure on China this week by proposing a doubling in tariffs on US$200 billion in Chinese imports. Beijing has vowed to counterpunch with trade sanctions of its own.

“If you’re going to take China on, you’d better make sure you’ve shored up your base with your allies and made sure you kept other markets open,” said Michael Camunez, president of Monarch Global Strategies consultancy and a former U.S. Commerce Department official.

Trump campaigned on a vow to overhaul the 24-year-old NAFTA with Canada and Mexico, a pact he called a job-killing disaster.

NAFTA did away with most barriers, including tariffs, on trade between the U.S., Canada and Mexico. Trump and other NAFTA critics say the agreement encouraged U.S. manufacturers to move factories—and jobs—south of the border to take advantage of lower-wage Mexican labour. He vowed to pull out of NAFTA if he couldn’t get a deal he liked.

Talks on a new NAFTA began almost a year ago but got bogged down over the Trump team’s insistence on measures that would discourage investment in Mexico and shift auto production to the United States.

Momentum suddenly resumed after Andres Manuel Lopez Obrador won the Mexican presidential election last month and expressed support for overhauling NAFTA. The Mexican negotiators are hoping to reach an agreement this month with the United States, then bring Canada back into the negotiations.

Related: U.S.-Mexico NAFTA talks minus Canada: feds encouraged talks are back on

Canada’s absence from this week’s talks raised suspicions that the United States was pursuing a divide-and-conquer strategy with its two trading partners, isolating Canada to pressure it into agreeing with whatever the U.S. and Mexico came up with.

But David MacNaughton, Canada’s ambassador in Washington, told the AP it made sense for the U.S. and Mexico to negotiate first: “There are a couple of lingering issues between the U.S. and Mexico” that need to be settled “before we can move on,” he said.

The most obvious is Trump’s push to require that autos contain more content made within the NAFTA trade bloc and specifically from countries that pay high wages (that is, not Mexico) to qualify for duty-free status under the agreement. But the two countries are whittling away at their differences.

In June, Trump slapped taxes on imported steel and aluminum, hoping in part to pressure Canada and Mexico to agree to a NAFTA rewrite that was to his liking. But the two neighbours—and other U.S. allies and trading partners—have slapped back with tariffs of their own, often aimed at U.S. farmers who supported Trump in the 2016 election. The Mexicans, for example, targeted U.S. pork and cheese.

The retaliation is beginning to take a toll. The Trump administration last week announced a $12 billion package to ease the pain on farmers.

Related: Some GOP lawmakers critical of relief program for farmers

Daniel Ujczo, a lawyer with Dickinson Wright PLLC in Columbus, Ohio, said the U.S. has a big incentive to smooth over the differences with friendly countries and get the tit-for-tat tariffs removed. “The faster we get a deal with Mexico, the faster that relieves pressure on farm country,” he said.

The Trump administration last week pulled back from the brink of a trade war with the European Union, suspending planned tariffs on European autos while it talks with the EU about tearing down trade barriers.

As tensions with U.S. allies seem to ease, tensions with China are rising. On Wednesday, the Trump administration proposed hiking planned tariffs on $200 billion in Chinese imports to 25 per cent from an originally announced 10 per cent. The world’s two biggest economies are sparring over what Washington says are Beijing’s predatory tactics to obtain American technology.

Deals with allies like the EU, Mexico and Canada could give the administration “some breathing room on China and signal to the world that they aren’t looking to fight with everyone,” said Christine McDaniel, senior research fellow at George Mason University’s Mercatus Center.


Related Stories
Trump appears to raise new doubts about U.S. China trade deal
World holds its breath as Trump prepares to punish China on trade
In the face of America’s trade rancour, Canada and Mexico look to China
U.S. tells WTO it will consult with China over tariff policies