U.S. hits back with WTO challenge against Canada’s retaliatory tariffs

After dealing crushing blows to traditional allies with levies on metals, the Trump administration is filing WTO complaints against Canada and others over their counter-tariffs on imports of American goods 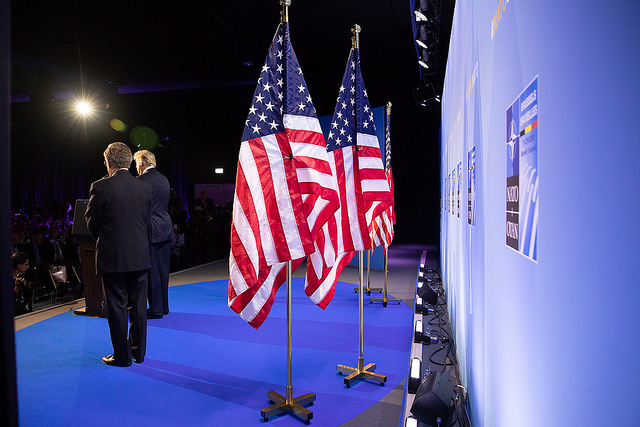 The U.S. president who has decried the international trading order is now using that system to attempt to punish other countries. PHOTO: The White House/Flickr

OTTAWA—The United States fired back Monday at the Canadian government’s retaliatory tariffs on American imports by launching a formal challenge with the World Trade Organization.

The Trump administration also called countermeasures aimed at the U.S. by Canada and other trading partners “completely without justification under international rules.”

The federal Liberal government introduced reciprocal duties earlier this month on some U.S. imports after the White House slapped Canada and others with tariffs on steel and aluminum.

Foreign Affairs Minister Chrystia Freeland has called Washington’s metal tariffs absurd and illegal because they’ve been applied on the premise that Canada represents a national security threat to the U.S. Ottawa’s response has been $16.6-billion worth of countermeasures on imports of American steel, aluminum and consumer products.

The U.S. took a fresh step Monday in the trade fight by filing separate disputes at the WTO against Canada—as well as the European Union, China, Mexico and Turkey—over each jurisdiction’s set of counter-tariffs on imports of American goods.

Related: An aisle by aisle look at how to buy Canadian at the grocery store

“The actions taken by the president are wholly legitimate and fully justified as a matter of U.S. law and international trade rules,” U.S. Trade Representative Robert Lighthizer said in a statement.

“Instead of working with us to address a common problem, some of our trading partners have elected to respond with retaliatory tariffs designed to punish American workers, farmers and companies.”

Lighthizer added Monday that the countermeasures recently applied against the U.S. appear to breach WTO commitments. Resolving international trade disputes is a key role of the WTO.

“The United States will take all necessary actions to protect our interests, and we urge our trading partners to work constructively with us on the problems created by massive and persistent excess capacity in the steel and aluminum sectors,” he said.

Last month, U.S. Commerce Secretary Wilbur Ross said the U.S. tariffs against Canada and other allies were designed to force them into action to address the world’s overproduction and overcapacity of steel.

Freeland has insisted that Canada introduced stronger safeguards on steel well before the U.S. imposed the tariffs.

On this front, Ottawa feels it has more work to do. The federal government has said it’s consulting with industry so even more can be done to address the diversion and dumping of aluminum and steel in the Canadian market.

On Monday, a spokesman for Freeland defended Ottawa’s retaliatory duties and argued they’re within Canada’s WTO and NAFTA rights.

Adam Austen wrote in an email that it’s “a measured, perfectly reciprocal, dollar-for-dollar response to the U.S. tariffs.”

“As Minister Freeland has said repeatedly, it is absurd to view any trade with Canada as a national security threat to the U.S.,” he said.

“The tariffs imposed by the United States on Canadian steel and aluminum are unacceptable and illegal.”

The unprecedented cross-border tensions have presented big challenges for the Canada-U.S. trading relationship. The hurdles include the stalled renegotiation of the North American Free Trade Agreement and President Donald Trump’s threats that he will impose new tariffs—this time on the automotive sector.

There are widespread warnings that levies on the highly integrated Canada-U.S. auto sector would be far more damaging for the economy than the duties on steel and aluminum. In Canada, Ontario would easily suffer the biggest economic blow among of the provinces.

The Trump administration is still considering the auto tariffs and, later this week, the U.S. Department of Commerce will hold hearings on whether it can impose them over national security concerns, much like it did for steel and aluminum.

David MacNaughton, Canada’s ambassador to the U.S., is scheduled to testify Thursday at the hearings in Washington. Jim Wilson, the Ontario government’s minister for economic development and trade, will also present his arguments before the hearings.

“I will be vigorously advocating for the Canadian and American jobs that depend on our historic trading relationship,” Wilson said in a statement Monday.

“It is clear that Ontario is not a national security risk to the United States. In fact, the U.S. and Ontario share many of the same goals.”