From total headscratchers to pernicious deceits, both people vying to become the leader of the world's most powerful country play fast-and-loose with the facts

November 7, 2016   by Calvin Woodward And Jim Drinkard, The Associated Press 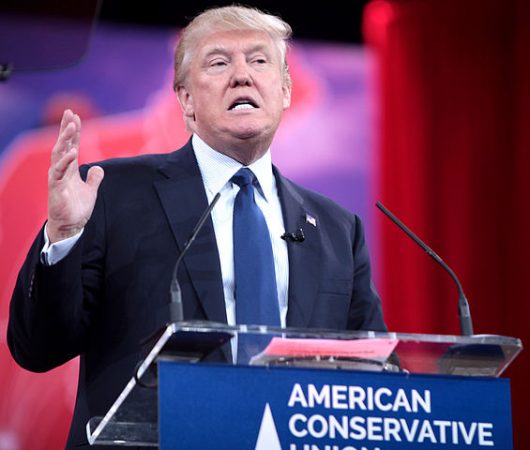 WASHINGTON—At times it has seemed as though this presidential campaign was occurring in some alternate universe. Up is down, no means yes, day is night.

Donald Trump’s tweets, speeches, interviews, debate statements, news conferences and off-the-cuff remarks—that is, pretty much everything he has said during his waking hours—have been a source of hyperbole at hyper-speed. His misstatements have been so ubiquitous that Hillary Clinton’s slippery words often slithered right on by unnoticed.

Trump made pernicious use of fictional numbers, concocted certain events and both contradicted and misrepresented things he has clearly said on the record.

Clinton took actual facts and went beyond them, promising more than she can deliver, cherry-picking numbers and otherwise standing for the lawyerly Washington tradition of paying partial heed to reality while bending it to her advantage. Cautious by nature, she was most inclined to stretch facts to their snapping point when on the defensive about her email practices, which was often. Clinton’s defensive position, in essence: The dog ate my homework.

With Election Day finally, nearly, upon us. Some lowlights from both candidates:

For Trump, day is night

• On Clinton’s approach to borders:“She wants to let people just pour in. You could have 650 million people pour in and we do nothing about it. Think of it. That’s what could happen.”

Facts: For this to happen, every other country in the Americas, from Mexico south to Chile’s southern tip, and a chunk of Canada would have to empty its entire population into the U.S.

But wait, there’s more. Trump said that under Clinton, this could happen “in one week.”

This was no slip of the tongue—at several events he’s spoken of 600 million coming in under Clinton; at another, 650 million. This doesn’t faintly resemble anything Clinton has proposed for the U.S. (population 325 million).

Trump is riffing off of a leaked Clinton speech to bankers in which she spoke of her dream of a “hemispheric common market, with open trade and open borders.” The remarks in context suggested an interest in free commerce, not necessarily the free movement of people. But no one is talking about packing whole populations from other Western Hemisphere countries into the U.S. like sardines.

Numbers are always pliable in the political arena; for Trump they are often whatever he wants them to be. He routinely overstates the U.S. trade deficit by hundreds of billions of dollars, no matter how many times he’s called on it.

• On the battle of Mosul, Iraq, and other operations against Islamic State militants: “Whatever happened to the element of surprise?”

Facts: Many generals agree with Trump that it is folly to tell IS that it is about to be attacked. But those are armchair generals. Real ones tend to see the value in pre-announcing a major offensive.

In the case of Mosul, signalling an assault in advance was a way for Iraqi forces to warn civilians in the city and to encourage a resistance movement to weaken IS before the battle began. Moreover, any element of surprise had been long lost; preparations for the battle began more than a year ago, with the U.S. part in it under close scrutiny by Congress.

More broadly, Trump’s theory that secrecy should surround all such operations reflects a lack of understanding of how this battle against IS has developed over the past two years, as well as certain obligations to keep Congress informed. Basic decisions like when to assault Mosul are left to the Iraqi government, because it is the Iraqis who will have to govern the place when the fighting is done.

The U.S. wants the Iraqis to own the Mosul problem, both militarily and politically, so they don’t repeat the mistakes that allowed IS to capture the city in the first place.

Mosul was the obvious last major target of an Iraqi counteroffensive against IS, whose ability to defend the city had been undermined by months of U.S. airstrikes against its leaders and financial and military resources. Surprise was not an option.

• When Clinton accused him of calling climate change a hoax invented by the Chinese: “I did not. I did not.”

Facts: On these and other occasions, Trump has blithely denied making statements he plainly made, even though he was caught on tape making them.

In a 2012 tweet, he wrote: “The concept of global warming was created by and for the Chinese in order to make U.S. manufacturing non-competitive.” He later claimed he was kidding, but he’s also repeated the claim that climate change is a hoax, and one that benefits China. In 2014: “Snowing in Texas and Louisiana, record setting freezing temperatures throughout the country and beyond. Global warming is an expensive hoax!”

During this campaign, he also tweeted “check out sex tape and past” of former 1996 Miss Universe Alicia Machado, whom Clinton discussed in a presidential debate as an example of Trump’s derogatory comments about women.

Machado, a Clinton supporter, criticized Trump for body-shaming her by calling her “Miss Piggy” when she gained weight. Was there a sex tape? In a manner, yes. Machado was filmed in a 2005 Spanish-language reality show in bed with a man; no nudity is seen but she said they were having sex in the footage.

• “I was against the war in Iraq, because I said it’s gonna totally destabilize the Middle East. … I was opposed to war from the beginning. … ”I would not have had our troops in Iraq.“

Fact: Trump publicly supported the war before it started and praised its early progress. He’s insisted otherwise uncountable times, despite the record.

It’s true he wasn’t a cheerleader for the March 2003 invasion. For example, he said a few months before the war that the economy and North Korea were bigger problems. But that’s hardly opposition. In September 2002, he told Howard Stern on the radio, when asked if he would back an invasion, “Yeah, I guess so.” Days after the invasion, he said it “looks like a tremendous success from a military standpoint.”

Moreover, Trump offered support for a hypothetical invasion of Iraq in his 2000 book, suggesting he would favour a pre-emptive strike if Iraq were viewed as a threat to national security.

Facts: This is a total head-scratcher. The quote is from November 2015 and helped set a pattern of tall tales that would continue through the campaign. It also fed into one of the signature insults of a campaign full of them—when Trump appeared to mock the disabilities of a New York Times reporter whose recollections from New Jersey after the 9-11 attacks did not support his own.

No video or other proof of large-scale celebrations of the falling towers by Muslims in New Jersey ever emerged.

Serge Kovaleski of the Times, who was working for The Washington Post in 2001, reported in the week after 9-11 that authorities in New Jersey detained and questioned “a number of people who were allegedly seen celebrating the attacks.”

Kovaleski has a congenital condition that restricts joint movement. In a speech, Trump went after the “the poor guy, you oughta see this guy” making jerking gestures and taking a mocking tone.

Trump later denied he was imitating Kovaleski and further claimed “I have no idea” who he is and didn’t know of his condition. But Kovaleski said he had met Trump repeatedly, in face-to-face face interviews and at news conferences, and “Donald and I were on a first-name basis for years.”

• On why he continued to raise questions about Barack Obama’s country of birth even after the president produced his birth certificate in 2011: “Nobody was pressing it, nobody was caring much about it.”

Facts: Trump himself continued to press false theories about Obama’s birthplace after they were debunked. His claim that the matter faded when the birth certificate came out belies his efforts to keep the myth alive.

Clinton: The dog ate my homework

• “For those of you who are concerned about my using personal email, I understand. And as I’ve said, I’m not making excuses. I’ve said it was a mistake and I regret it.”

Facts: She has made a variety of excuses on the way to a grudging acknowledgment that her use of a personal server and email for State Department business was wrong.

She’s said she used personal email because she wanted the simplicity of a single digital device, although it turned out she carried several devices. She said her email practices were “approved” when they were not _ they merely had not been expressly prohibited at the time for the secretary of state.

She said she didn’t understand that material marked with a “c” that passed through her personal communications system meant it was confidential. She said other secretaries of state did it first. That’s partly true, but in a limited way and not with their own servers. She said she never passed on classified material in her system. The FBI found she passed on three email chains with information that had classified markings in the body of the emails; the State Department contended two of those chains held unclassified material.

• On the Trans-Pacific Partnership: “I did say I hoped it would be a good deal.”

Facts: Clinton heartily supported the Pacific trade deal in speeches around the world as secretary of state; she did not merely hope it would turn out well. Clinton declared in Australia in 2012, “This TPP sets the gold standard in trade agreements to open free, transparent, fair trade, the kind of environment that has the rule of law and a level playing field.” Similar speeches elsewhere affirmed her belief that the deal, still under negotiation, was “groundbreaking,” ”exciting“ and ”embodied“ 21st century standards.

That position became awkward if not untenable in her Democratic primary race against Bernie Sanders, a foe of the deal, and she turned against it. Her less-than-detailed explanation: The deal as finally negotiated did not measure up to her standards for protecting U.S. wages, jobs and national security. Yet the final deal contains some of the strongest labour protections of any U.S. trade agreement.

The subject became Exhibit A in the case made by critics that she lets political currents, instead of personal conviction, guide her.

A hacked email from Clinton adviser Joel Benenson may have inadvertently lent weight to that suspicion. “Do we have any sense from her what she believes or wants her core message to be?” he asked. “Sanders has simplicity and focus.”

Facts: Not true, according to the nonpartisan Committee for a Responsible Federal Budget. It estimates her increased spending in areas such as infrastructure, more financial aid for college and early childhood education, would increase the national debt by $200 billion over 10 years. That is far less than their estimate for Trump, who they predict would add $5.3 trillion over 10 years. But it’s plenty more than a penny.

Facts: The Islamic State group did not exist for almost all of Clinton’s adult life. She’s 69. ISIS sprung to life four years ago.