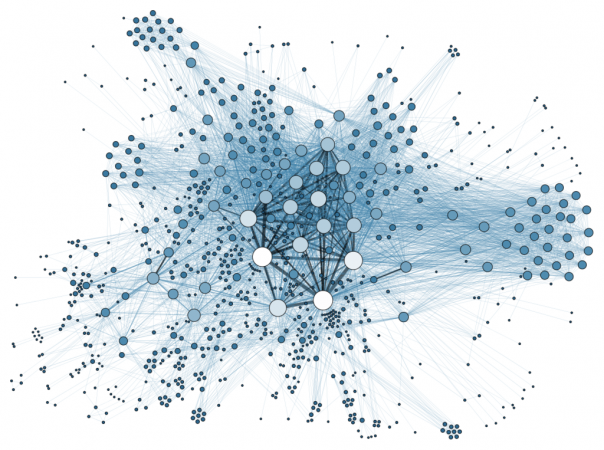 PHOTO: Who controls the data in a network?/Martin Grandjean

LONDON – Britain needs tough new rules to help counter the dominance of big tech giants like Facebook, Google and Amazon, a review of competition in the digital market concludes.

Wednesday’s 150-page report adds to an intensifying worldwide debate over the need for stricter regulation of Silicon Valley technology giants amid concern about their influence on the broader economy and their control of data. In the U.S., Democratic presidential candidate Elizabeth Warren last week proposed breaking up the biggest U.S. tech companies, slamming them for having too much market and political power.

The British report was released the same day that Swedish music-streaming service Spotify said it filed an antitrust complaint against Apple, accusing it of stifling competition through its control over the iPhone’s operating system and app store. Spotify’s beef with Apple centres on a 30 per cent tax that it and other digital services have to pay to use Apple’s “in-app” payment system, making Spotify subscriptions more expensive than Apple Music.

The British government’s review was led by Harvard University professor Jason Furman, who was a chief economic adviser to former U.S. President Barack Obama. The report found that global tech giants don’t face enough competition and said that existing rules are outdated and need to be beefed up.

“The digital sector has created substantial benefits but these have come at the cost of increasing dominance of a few companies, which is limiting competition and consumer choice and innovation,” Furman said. “Some say this is inevitable or even desirable. I think the U.K. can do better.”

Britain’s financial secretary, Philip Hammond, said the government would respond later this year to the report’s recommendations, any of which must be approved by Britain’s Parliament to take effect.

Recommendations include setting up a new “digital markets unit” tasked with giving people more control over their data by using open standards. That would let people move or share their personal information if they switch to a new digital service.

The report’s authors said by making it easier for people to switch, “data mobility” would result in new digital services while creating new business opportunities to manage the data.