From Keystone XL to infrastructure and regulatory reform, Canada played a surprising role in the speech that outlined Trump's new America-first vision 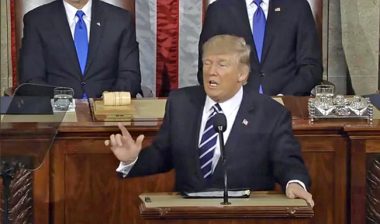 WASHINGTON—The prime minister of Canada received a surprise shout-out during Donald Trump’s first speech to a joint session of the U.S. Congress, in an address that carried more than one reference to their northern neighbour.

The president mentioned Justin Trudeau as he hailed the creation during the prime minister’s recent visit to Washington of a women’s business group—a project involving the president’s daughter Ivanka.

Trump also seemed to borrow Trudeau’s focus on the middle class and unity in an address that marked a new, presidential tone from the man who stormed to the White House on a wave of controversial rhetoric.

“With the help of Prime Minister Justin Trudeau, we have formed a council with our neighbours in Canada to help ensure that women entrepreneurs have access to the networks, markets and capital they need to start a business and live out their financial dreams,” Trump said in the prime-time address.

Trump appeared at the group’s initial meeting at the White House; raised it during a White House press conference as something he was proud of; and mentioned it again in his state-of-the-union-style speech Tuesday. The idea for the project came from Trudeau’s chief of staff Katie Telford, who presented it to Ivanka’s husband, White House aide Jared Kushner.

Other elements of the speech that touched on Canadian interests included his promise to build the Keystone XL pipeline; his withdrawal from the Trans-Pacific Partnership; and his call for a still-vaguely-defined border adjustment tax.

He also saluted Canada’s immigration system as something to emulate.

It came during Trump’s attention-grabbing remarks on immigration reform. In the speech, and in comments Trump made earlier in the day to TV network anchors, he appeared to signal an interest in seizing a Holy Grail for a generation of U.S. policy-makers: an immigration deal between Republicans, who want a tighter southern border—and Democrats who want legal status for the country’s millions of undocumented people.

“Nations around the world, like Canada, Australia and many others, have a merit-based immigration system,” Trump said.

“I believe that real and positive immigration reform is possible, as long as we focus on the following goals—to improve jobs and wages for Americans, to strengthen our nation’s security, and to restore respect for our laws.

“If we are guided by the well-being of American citizens then I believe Republicans and Democrats can work together to achieve an outcome that has eluded our country for decades.”

The speech made only a passing reference to the biggest unknown in Canada-U.S. relations: the North American Free Trade Agreement, which Trump blasted daily during his election campaign and now wants renegotiated.

Republicans on Capitol Hill are still in the dark on his intentions regarding NAFTA. Although lawmakers are supposed to be involved in the process, they said they hadn’t received direction from the White House yet.

The uncertainty is heightened by the fact that one key player in trade negotiations, the United States trade representative, could see his Senate confirmation stalled for months, amid partisan wrangling and concern about his past legal work for foreign governments.

“I don’t have any information about when, or what process will be used,” said Republican Mike Crapo, a member of the Senate Finance committee, which would have a key role in trade negotiations.

Policy-makers are already overwhelmed by Trump’s insistence on health reform, and tax reform—where he’s requested big changes, popular changes, and not offered much direction on the specifics and hard choices.

People involved in Canada-U.S. relations might have picked up on other elements of the speech. Trump applauded the idea of joint public-private funding for a massive infrastructure spending project—which is a priority for the Trudeau government, although it remains controversial on the American left.

Trump also referred to his plan for regulation-slashing, which Canada might play a role in. The countries meet frequently through a regulatory co-operation body, and Treasury Board President Scott Brison offered to share some ideas during a trip last week to Washington.