Trump sits down with Putin in Helsinki and says, "I really think the world wants to see us get along'' 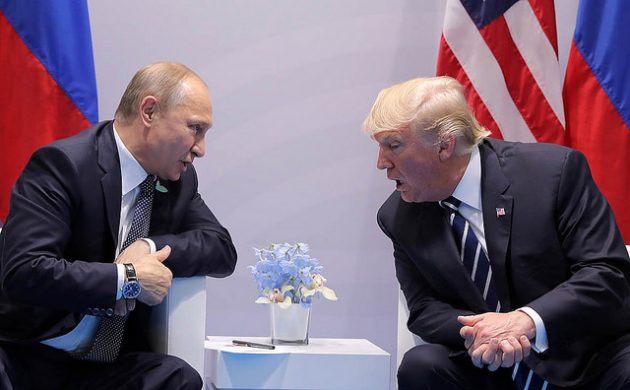 PHOTO: The first meeting between Trump and Putin, G20 Summit/Flickr

Helsinki – With a wink and a slouch, respectively, President Donald Trump and Russia’s Vladimir Putin opened their summit Monday as the American president declared that “the world wants to see us get along.” Trump laid out a list of topics for discussion that notably did not include Russian meddling in the 2016 presidential election.

“We have not been getting along well for the last number of years,” Trump said as he and Putin sat down at the Presidential Palace in Finland’s capital. “But I think we will end up having an extraordinary relationship. … I really think the world wants to see us get along.”

Putin, for his part, said he and Trump have maintained regular contact by phone and meeting at international events but “the time has come to have a thorough discussion on various international problems and sensitive issues.” He added: “There are quite a few of them for us to pay attention to.”

Putin struck a casual pose during Trump’s remarks, slouching in his chair with his legs wide and eyes low. He nodded along to some of Trump’s remarks before they were translated, showcasing his fluency in English. Trump leaned forward in his chair, his hands tented in front of him and frequently glancing over at the Russian president. At one point, he shot Putin a wink. After Trump concluded his remarks, American reporters shouted several questions about whether he would bring up election meddling during his discussions with Putin.

Trump did not respond; Putin appeared to smirk.

With that, the two leaders gave a quick handshake and their private meeting in the opulent Gothic Hall was under way. Just the two of them, each with a translator.

The summit began just hours after Trump blamed the United States – and not Russian election meddling or its annexation of Crimea – for a low-point in U.S.-Russia relations. The drama was playing out against a backdrop of fraying Western alliances, a new peak in the Russia investigation and fears that Moscow’s aggression may go unchallenged.

“Our relationship with Russia has NEVER been worse,” Trump tweeted Monday morning, blaming “many years of U.S. foolishness and stupidity and now, the Rigged Witch Hunt!”

The summit, which was being closely monitored by rattled world capitals, was condemned in advance by members of Congress from both parties after the U.S. indictment last week of 12 Russian military intelligence officers accused of hacking Democrats in the 2016 election to help Trump’s presidential campaign. Undeterred, the American president was set to go face to face with Putin, the authoritarian leader for whom he has expressed admiration.

The summit started late because Putin arrived in Helsinki about a half hour behind schedule in another display of the Russian’s leader famous lack of punctuality. Trump seemed to return the favour by waiting until Putin had arrived at the palace before leaving his hotel. Putin has been late for past meetings with the pope and British queen, among many others.

Trump and his aides have repeatedly tried to lower expectations about what the summit will achieve. He told CBS News that he didn’t “expect anything” from Putin, while his national security adviser said the U.S. wasn’t looking for any “concrete deliverables.” Trump told reporters during a breakfast Monday with Finland’s president that he thought the summit would go “fine.”

Trump said he and Putin would discuss a range of issues, from trade to the military, along with missiles and China. Not mentioned: Election meddling or Syria.

Trump said last week that he would raise the election-meddling issue with Putin, but said he didn’t expect Putin to budge on his denials.

“I don’t think you’ll have any ‘Gee, I did it. I did it. You got me,”’ said Trump, invoking a television detective. “There won’t be a Perry Mason here, I don’t think. But you never know what happens, right? But I will absolutely firmly ask the question.”

They’ll continue their discussions with an expanded group of aides and over lunch in the Hall of Mirrors, once the emperor’s throne room. The leaders will conclude by taking questions at a joint news conference.

Observers have raised concerns about the fact that the leaders will be alone during their first meeting, but for a pair of interpreters, meaning there will be no corroborating witnesses to accurately represent what was said during the conversation.

The meeting comes as questions swirl about whether Trump will sharply and publicly rebuke his Russian counterpart for the election meddling that prompted a special counsel probe that Trump has repeatedly labeled a “witch hunt.”