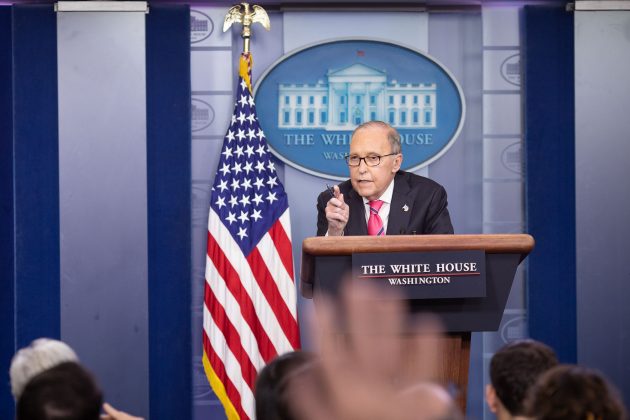 WASHINGTON—President Donald Trump’s senior economic adviser gave Canada and Prime Minister Justin Trudeau a symbolic pat on the back Sunday for how the federal government has been “hanging tough” on the diplomatically delicate extradition case of senior Huawei Technologies executive Meng Wanzhou.

Larry Kudlow said he’s “proud” of how Canada has handled the Meng matter—a tacit acknowledgment of the diplomatic bind the U.S. Justice Department created for the federal Liberals in December when they asked that the chief financial officer and telecom scion be arrested and held in Vancouver, pending extradition.

Meng, the daughter of Huawei founder Ren Zhengfei, is at the centre of a sprawling U.S. indictment unsealed last month that accuses the growing tech juggernaut of misrepresenting its ownership of a Hong Kong-based subsidiary between 2007 and 2017 to circumvent U.S. sanctions against Iran. She and the company are facing 13 counts of conspiracy, fraud and obstruction of justice.

“I’ll just say how proud I am of Prime Minister Trudeau, and Canada, for hanging tough on Huawei,” said Kudlow, director of the U.S. National Economic Council.

He acknowledged the grief the case has caused Canada since Meng, who remains under house arrest in Vancouver pending an extradition hearing, was detained at the city’s airport in early December: two Canadians have since been detained in China, ostensibly for national security reasons, while a third—convicted by a Chinese court of drug trafficking—is facing the death penalty.

“That’s why I’m so I’m so proud of Prime Minister Trudeau for staying with the rule of law and assisting the United States. I’m very proud of him.”

Kudlow made the comments following an appearance on a free-trade panel at the winter meeting of the National Governors Association in Washington alongside federal Transport Minister Marc Garneau. And it wasn’t the only instance that he dropped the prime minister’s name.

As world leaders were gathering last year in Argentina, where Trump, Trudeau and former Mexican president Enrique Pena Nieto signed the new U.S.-Mexico-Canada Agreement, the prime minister approached Kudlow in an effort to move past the animosity that had erupted six months earlier at the G7 meetings in June in Quebec.

Trump, apparently piqued by Trudeau’s hard-line rhetoric on tariffs and trade, unleashed a Twitter tirade that denounced the prime minister as “dishonest” and “weak,” refusing in the end to sign on to the agreed-upon end-of-summit communique. Kudlow called Trudeau’s comments a “betrayal,” while U.S. trade adviser Peter Navarro suggested he deserved a “special place in hell.”

The dust-up left Canada-U.S. relations, already strained over the ongoing NAFTA talks and a burgeoning cross-border tariff war, at their lowest point in recent memory—until Trudeau crossed the corridor to reach out to Kudlow.

“He came up to me—this is a true story—after the USMCA ceremony, he walked across the hall to come up and grab my hand and give me a hug,” Kudlow said. “I asked him if we could please turn the page on any of that stuff that occurred last spring, and he said, ‘Absolutely,’ and then we started having some policy discussions.

“Justin just grabbed my hand and gave me a bear hug, and I was thrilled.”

Asked whether the animosity has similarly diminished between the two leaders, Kudlow said: “I think it’s partly happened.”

On Friday, Trump himself floated the possibility—again—that the U.S. could drop criminal charges against Huawei, as the president wrapped up two days of negotiations at the White House aimed at resolving America’s own ongoing trade dispute with China.

“We’re going to be discussing all of that during the course of the next couple of weeks,” Trump said at the White House during an Oval Office meeting with Chinese President Xi Jinping’s special envoy, Vice Premier Liu He.

Late Sunday, Trump announced he would hold off on a dramatic spike in tariffs on Chinese exports, originally scheduled for Friday, pending the outcome of U.S.-China trade talks that he said on Twitter have “made substantial progress.”

“Assuming both sides make additional progress, we will be planning a Summit for President Xi and myself at Mar-a-Lago to conclude an agreement.”