Trudeau is interrupting his global tour to mediate the pipeline spat between John Horgan and Rachel Notley. After two days in Peru, Trudeau will return home April 15 to meet with the premiers before jetting off to Paris and London 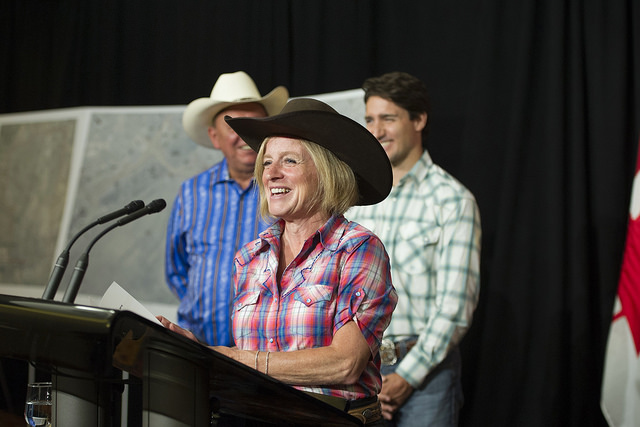 Trudeau will sit down with Alberta’s Rachel Notley and her B.C. counterpart John Horgan to try to resolve the Trans Mountain crisis. PHOTO: Premier of Alberta, Flickr

OTTAWA—Prime Minister Justin Trudeau will sit down Sunday with B.C. Premier John Horgan and Alberta Premier Rachel Notley in an effort to hash out a solution to the ongoing dispute over the Trans Mountain pipeline project.

Trudeau, who is on his way to Peru for the Summit of the Americas, will return to Ottawa for the meeting before resuming his travels to Paris and London, spokesperson Chantal Gagnon said Thursday, just moments before the prime minister’s flight took off.

Tensions over the pipeline impasse reached a new peak this week when Kinder Morgan stopped all non-essential spending on the expansion project, pending reassurance from the federal government that the project would be going ahead.

Trudeau had an emergency cabinet meeting on Tuesday where ministers discussed—but did not settle on—options for action, including whether to help finance the project or pull funding from B.C. to help convince Horgan to stop blocking the project.

Finance Minister Bill Morneau met Wednesday with Notley, after which he said the federal government would meet the company’s May 31 deadline for action.

Ottawa has jurisdiction for the pipeline and approved the expansion plans in 2016, but Horgan has thrown up a number of road blocks, including a lawsuit over the approval process and a threat to prevent oil from flowing through it, all of which have helped to spook Kinder Morgan’s investors.

The impasse has become one of the most difficult political predicaments to date for the Trudeau government, which is being squeezed between those who accuse it of not doing enough to get the expansion built, and critics who don’t want to see it built at all.

Trudeau posted a new video Thursday in which he insists he would never approve pipelines like the Trans Mountain expansion if he did not believe they could proceed safely.

In the video, Trudeau is seen strolling along a B.C. beach with Ocean Networks Canada CEO Kate Moran and Rob Stewart, president of B.C. Coast Pilots, discussing the government’s $1.5-billion oceans protection plan, which he says gives the government the confidence that Canada’s oceans and coastlines will be protected even with a new, expanded pipeline.

Trudeau has long insisted that the environment can’t be properly protected if Canada can’t also get its resources to market, since resource-driven economic growth is what allows the government to take steps to protect the environment. Had the government not approved the pipeline, it would never have been able to convince industry stakeholders or the Alberta government to support its climate and oceans protection plans, he has said.

Thursday’s developments come the same day as a new economic analysis from Environmental Defence and Climate Action Network Canada, which argues the country’s emissions targets can still be met without new pipelines and without hurting the economy.

With a shift to clean technology, the report says, Canada’s economy would grow by up to 38.5 per cent between now and 2030, even with the actions necessary to meet emissions targets under the Paris climate change agreement.

Meanwhile, doing nothing on climate change would mean economic growth of 39 per cent by 2030, it says—a difference that would be readily taken up by the savings in health costs and other impacts resulting from less pollution and lower global temperatures.

Thursday also saw the release of a letter to Trudeau from some 40 environment groups in Quebec, warning the prime minister that his electoral fortunes in that province will be in peril if he makes Trans Mountain his political legacy.

Aurore Fauret, with the group 350 Canada, says Trudeau has not provided any scientific evidence to back his claims that the pipeline will pose no risk to emissions levels, the oceans or coastlines.