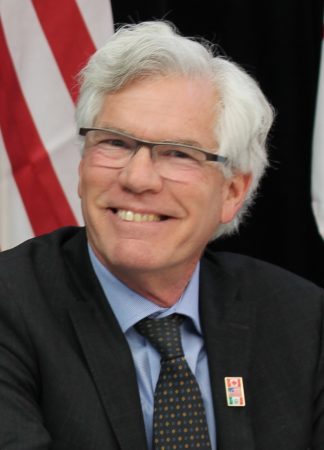 OTTAWA—Liberal MP Jim Carr—a federal minister described by peers and rivals alike as hardworking, genuine and an “always awesome colleague”—announced Friday that he has been diagnosed with a form of blood cancer.

Carr, who served as natural resources minister and international trade minister during Prime Minister Justin Trudeau’s first mandate, said in a statement that he has begun treatment for the disease, which has also affected his kidneys.

The statement said Carr has started undergoing chemotherapy and dialysis that will “continue for the near future.”

During the campaign, Carr experienced what he called flu-like symptoms, which prompted a call to his doctor and a round of routine blood tests.

As election results rolled in on Monday night—Carr handily held on to his Winnipeg riding with 45% of the vote, outpacing the runner-up by more than 13,800 ballots—his doctor ordered him to go to the hospital.

The very next day, doctors in Winnipeg diagnosed Carr with multiple myeloma, the most common type of plasma cell cancer.

“I am feeling well, my spirits are high,” Carr said, noting that he has already briefed Trudeau about his circumstances. “I spoke to the prime minister and reiterated my commitment to continue serving my constituents and all Canadians.”

He also thanked the doctors, nurses and staff who are providing him care, and that he and his family “appreciate everyone’s respect for our privacy at this time.”

Carr was first elected in 2015 as the MP for Winnipeg South Centre, and a few weeks later became Trudeau’s minister of natural resources.

Mandated with finding new markets for Canadian oil and gas, Carr stickhandled the government’s efforts to expand the Trans Mountain pipeline project—which the Liberals spent $4.5 billion to buy when Kinder Morgan opted not to forge ahead—amid a heated public debate, as well as reform the country’s energy regulator and environmental assessments to restore public faith in the processes.

“These are interesting times and they’re important times,” the former CEO of the of Business Council of Manitoba told The Canadian Press shortly after his appointment to cabinet four years ago.

“But I also choose to see them as a time of opportunity.”

In the summer of 2018, Trudeau shuffled Carr to oversee international trade, giving him the task of opening new doors for Canadian goods and services, deepening ties in places like Latin America, finalizing the Canada-EU free trade agreement, and pulling trade talks with China out of a rut.

Given his performances in both files, Carr seemed like a lock to receive a position in Trudeau’s new cabinet, which the prime minister plans to unveil Nov. 20.

“Jim, as you take time to focus on your health, I know you’ll get through this—and you’ll continue proudly serving Manitobans & Canadians,” Trudeau wrote on Twitter.

“You have our full support, my friend.”

An estimated 3,300 Canadians will be diagnosed with the cancer this year, based on statistics from the Canadian Cancer Society, and 1,550 will die from the disease. The net five-year survival rate for multiple myeloma is 44%, the society says.

From across party lines, Carr’s news was met with well-wishes.

Manitoba Premier Brian Pallister, a Progressive Conservative, said that “all Manitobans will be in your corner, Jim.” Manitoba NDP Leader Wab Kinew wished Carr, who called Carr “my MP and friend,” wished the Liberal “good health,” adding “we are pulling for you.”

“I have no doubt that he will face this challenge as he has others—with strength and determination,” wrote Winnipeg Mayor Brian Bowman.

Federally, Conservative MP Dan Albas echoed hopes for successful treatments. Cabinet colleague Melanie Joly wrote that Carr has been “a leader in many fights, and this one is another one you will win.”

“We are all with you,” wrote Catherine McKenna, who called Carr an “always awesome colleague.”