TPP will have ‘no positive outcome for Canadian manufacturing,’ says Ford exec

Dianne Craig, president and CEO of Ford Motor Co of Canada, Ltd., made the comments at the Canadian International AutoShow 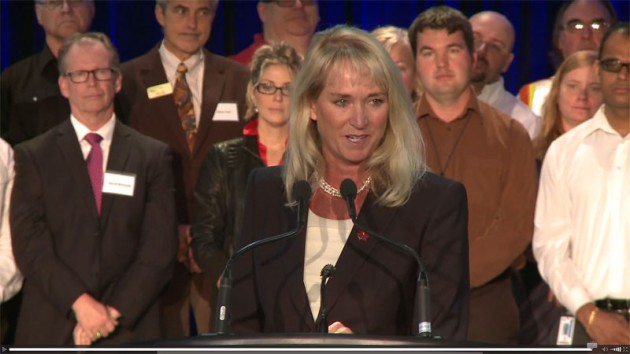 Ford of Canada CEO Dianne Craig making comments at a 2013 announcement at the Oakville Assembly Plant. This image was taken from a video distributed by Ford.

TORONTO—The CEO of Ford’s Canadian operations says risks posed by the Trans-Pacific Partnership to the automotive manufacturing sector are among the topics she plans to raise in a meeting with federal government officials later this month.

“We support free trade, but it has to be fair trade,” Dianne Craig said at the Canadian International AutoShow in Toronto on Feb 11.

“We’ve got to get these trade agreements right, and right now as the TPP stands, there will be no positive outcome for Canadian manufacturing.”

Reid Bigland, CEO of Fiat Chrysler Automobiles Canada, also spoke out against the trade deal at the auto show Thursday, calling it “unfortunate” that Canada wasn’t able to strike a deal similar to the one in the United States.

But, he added, the automaker can only focus on things that are within its control.

“We’re never one to be crying in our soup about this or that,” Bigland said. “We’re going to get out there and we’re going to compete.”

Ontario, which relies heavily on the auto manufacturing sector, has been losing new investment to Mexico and the southern U.S., where labour costs are lower.

The fund offers loans to provide incentives for automotive investment, but Tanguay would like to see the money doled out as grants.

However, he has stopped short of calling for higher monetary incentives, noting it is up to federal and provincial officials to evaluate the economic benefits they reap from such incentives.

Craig agreed that the fund should be restructured, but added that the amounts of the subsidies should be boosted as well.

“Right now, the way the loans are treated by the Canadian government, they’re not competitive, because in other jurisdictions, they’re not taxable,” Craig said.