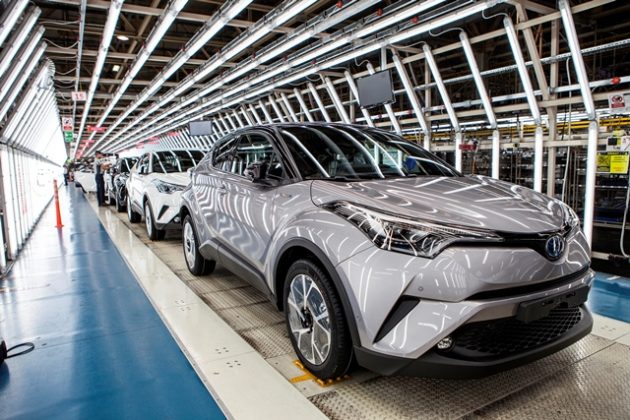 TOKYO – Toyota Motor Corp. reported a 28 per cent surge in the last quarter on growing sales in Europe, Asia and the Americas and cost cutting. It raised its profit forecast for the full year.

The top Japanese automaker said Tuesday that its July-September profit totalled 585.1 billion yen ($5.2 billion), up from 458.3 billion yen the year before. Quarterly sales rose 2 per cent to 7.31 trillion yen ($64.7 billion).

The manufacturer of the Camry sedan, Prius hybrid and Corolla subcompact forecast a 2.3 trillion yen ($20 billion) profit for the fiscal year through March. That exceeds its earlier forecast for 2.1 trillion yen ($19 billion), but is down nearly 8 per cent from nearly 2.5 trillion yen in the previous fiscal year.

Vehicle sales slipped in the U.S. and Japan but improved in Europe, the rest of Asia and Central and South America. The company stuck to its full-year forecast for selling 8.9 million vehicles globally for the year through March 2019.

Cost reductions and marketing efforts helped the results for the latest quarter though an unfavourable exchange rate hurt, according to Toyota.

“We are steadily making progress toward achieving our challenge-level target,” Senior Managing Masayoshi Shirayanagi said in a statement of cost cutting efforts.

Toyota, often seen as representing iconic Japanese manufacturing, is trying to focus on artificial intelligence, autonomous driving, car-sharing services and other new uses of technology to keep up with changes in the industry.

Toyota President Akio Toyoda, a member of the founding family, has repeatedly said Toyota’s business needs to change from merely making various vehicles to addressing all kinds of mobility needs.