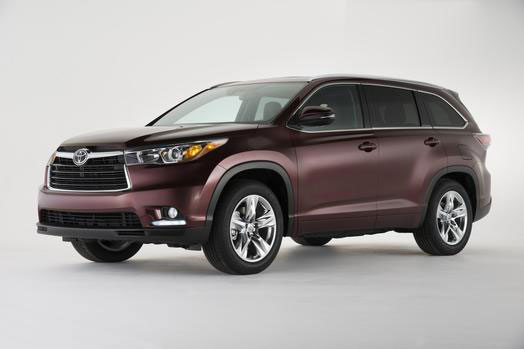 Both gasoline engines sip fuel, so the 2016 Highlander ranks near the top among non-hybrid, gasoline-powered, mid-size SUVs in federal government fuel economy ratings.

All Highlanders come standard with a backup camera and eight air bags.

It’s the No. 2 mid-size SUV in the country with sales up more than 10 per cent this calendar year from a year ago.

The test Highlander XLE with all-wheel drive exemplified how convenient the vehicle is.

Need to pick up your kids and their friends after hockey? Not a problem. Even with all seats occupied, the Highlander still has 13.8 cubic feet of space behind the third row for storing cargo. Each seat has a place for storing juice boxes and other drinks.

Heading out for an adult-only dinner and a movie? The Highlander is good looking and all but the base LE come with leather-covered seats or Toyota’s Sof-Tex realistic leather-looking seat material. Buyers can opt for individual “captain’s chairs” in the second row rather than a bench seat, so the Highlander can accommodate a second couple. These captain’s chairs provide good comfort and a side table with integrated cup holders.

The test XLE included power moonroof, power front seats and voice controls, easy-to-operate navigation system and a large, modern display screen atop the middle of the dashboard. With all-wheel drive added in, price topped out at $39,450.

The Highlander is especially good in bad weather, thanks to all-wheel drive and traction control. Road bumps came through mostly as mild vibrations, and the test Highlander, despite its beefy structure and more than 4,300-pound weight, maintained its poise surprisingly well in sweeping curves and turns.

Moving the second-row captain’s chairs out of the way for access to the third row required two hands—one to lift the lever to activate the seat movement and the other to push the seat forward. But the resulting space to climb into the vehicle was appreciated.

As is typical, seat cushions on the third row were short and legroom back there is less than 28 inches, so the space is best for young ones.

A highlight: There’s no reason to shout to talk to third-row passengers. The Highlander has a Driver Easy Speak microphone system that transmits the driver’s voice clearly to the third row.

Seats fold down in a number of configurations, so the Highlander has a utilitarian design.

On the test Highlander, fit and finish, inside and out, was excellent. So was fuel mileage: The vehicle was rated at a combined 20 mpg for city/highway travel. The tester, with some aggressive driving and lots of stop-and-go traffic, still averaged 20.1 mpg.

Editors Note: This story was edited to remove the U.S. pricing of the vehicle.