Top 10 stories of 2014 on Canadian Manufacturing.com 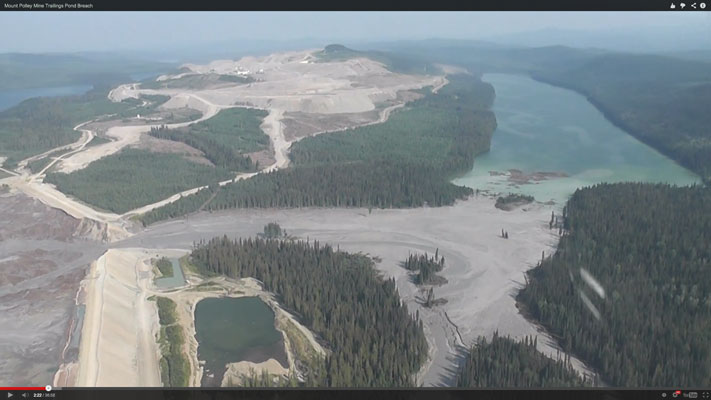 Screen capture from a video showing a tailings pond breach in Northern B.C. This story comes in at No. 5 on our list of biggest stories of 2014.

10. Wynne’s big win
In a snap election that was supposed to be Tim Hudak’s to lose, voters delivered a stinging rebuke to the Conservatives, robbing the party of 10 seats and forcing its leader to step down in defeat as Liberal leader Kathleen Wynne stormed Queen’s Park in a decisive majority election win.

8. Oil boom ghost town
Marathon Petroleum Corp. was considering a US$2.2-billion expansion of it’s suburban Detroit-area refinery to handle more oilsands crude, but local residents didn’t like the smell or the pollution it was already kicking out. So Marathon did what any sensible company would do—bought out the town for $65,000-per-house.

7. Oilsands bear attack
An oilsands worker was attacked and killed by a bear at Suncor Energy’s base plant approximately 25 kilometres north of Fort McMurray. Occupational health and safety is a different beast in the oil patch.

5. Mount Polley tailings breach disaster
The equivalent of 2,000 Olympic swimming pools of mining waste was discharged into the pristine waterways of B.C.’s Cariboo region, forcing hundreds to stop using water in the area. The long term impacts are still not known.

4. Ford’s aluminum foil
Ford unveiled its F-150 with a body built almost entirely out of aluminum. The lighter material shaves as much as 700 pounds off the 5,000-pound truck, a revolutionary change for a vehicle known for its heft and an industry still heavily reliant on steel.

3. Myth of the middle class
An internal federal government document highlighting data that is in stark contrast to the Conservative party messaging at the time declared the Canadian dream of a middle-class lifestyle has become “a myth more than a reality.”

2. The Wal-Mart Wave
Wal-Mart Stores Inc. unveiled a new concept truck which could be the key to fleet efficiency in the future. Dubbed the Walmart Advanced Vehicle Experience, or WAVE, it is replete with aerodynamic features.

1. Battery-power game-changer
The most popular story of busy 2014 was also big news for the cleantech sector. Alcoa Inc. and Israeli firm Phinergy are working together to commercialize an aluminum-air battery they claim can extend the range of an electric vehicle by about 1,600 kilometres.