Production problems, which CEO Musk promised were in the past, left Tesla well short of forecasts, building just 220 Model 3s in Q3 compared to 1,500 promised. It also lowered Q4 expectations and said it fired about 700 workers last month 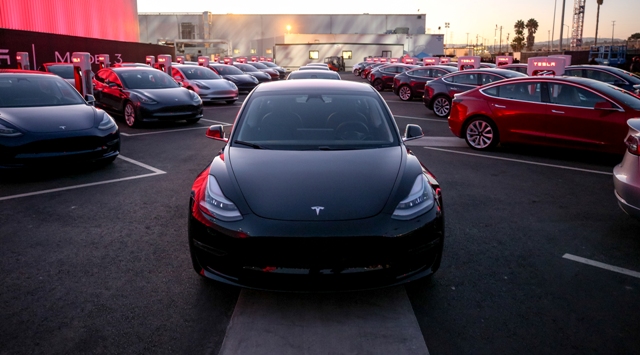 The company handed over the keys to the first Model 3s this summer. It’s produced only 220 of the vehicles thus far. PHOTO: Tesla

DETROIT—Tesla Inc.’s first attempt at high-volume production isn’t going as well as it hoped—and the company has a record quarterly loss to show for it.

Tesla posted a US$619 million loss in the third quarter as it spent heavily to clear up production bottlenecks and bring its hotly anticipated Model 3 sedan to market.

The loss, of $3.70 per share, compared to a profit of 15 cents per share in the July-September period a year ago. That was a far bigger decline than Wall Street had predicted. Analysts polled by FactSet forecast a loss of $2.85 per share.

The $35,000 Model 3—which is half the cost of Tesla’s previous models—could move Tesla from a luxury niche automaker into the mainstream. It introduced the Model 3 in July with a massive party at its Fremont, California, factory.

Tesla CEO Elon Musk promised that the Model 3, which has more than 500,000 potential buyers on its waiting list, would be simpler to make than Tesla’s previous vehicles and not plagued with the same delays. But the company produced just 220 Model 3s in the third quarter, far fewer than the 1,500 Musk promised.

And the problems will continue. Tesla said it now expects to make 20,000 Model 3s per month by the end of 2018’s first quarter. Musk had initially set a target of December for that production. Musk said a supplier to the battery factory was partly to blame for the delays.

“Tesla is learning what traditional automakers have long known—mass vehicle assembly is complicated and expensive,” said Michelle Krebs, a senior analyst at Autotrader.com.

Musk—who held the company’s earnings conference call from the company’s Nevada battery factory—insisted things were improving. He said Tesla will likely be making a few thousand Model 3s per week at the end of this year.

“I was really depressed about three or four weeks ago,” he said. “Now I can see a clear path to sunshine.”

And while some customers may be frustrated by the delays, they’re not necessarily losing faith in Tesla.

“It is disappointing, but I would rather that Tesla make the car correctly and to an optimal finish than rush and turn out a disappointing product,” said Lisa Gingerich, a Milwaukee-based attorney who reserved a Model 3 within minutes of the order bank’s opening in March 2016. “At the rate Tesla is producing, the Model 3 may be my Christmas present to myself next year!”

A defiant Musk also stressed that the 14-year-old company recently delivered its 250,000th vehicle, up from 2,500 just five years ago.

“For the skeptics out there, ask them, which one of them predicted that Tesla would go from 2,500 units delivered to 250,000 units now? I would suspect zero,” Musk said.

Tesla had other significant expenses in the quarter. The company opened 18 stores and service stations worldwide and set up 126 new Supercharger stations to try to prepare for the increase in demand from Model 3 buyers.

Musk didn’t confirm reports that the company has selected a site for a new factory in China. He said the company expects to start production there in three years, and that vehicles made in China will primarily be sold there and in neighbouring countries.

He did confirm that Tesla fired 700 workers—or about 2 per cent of its workforce—last month because of poor performance reviews. But he said the company’s action was a typical one, not the result of the Model 3 issues.

Tesla’s revenue rose 30 per cent to $2.9 billion for the quarter, in line with analysts’ expectations. Tesla said installations for its energy storage business more than doubled from a year ago. Energy generation and storage accounted for 11 per cent of Tesla’s third quarter revenue.

Sales of Tesla’s two other vehicles—the Model S sedan and Model X SUV—rose 4.5 per cent to 25,915. Tesla said net orders for those vehicles hit a record level in the third quarter, setting the stage for record deliveries in the fourth quarter. The company says it’s on track to deliver 100,000 Model S and Model X vehicles in 2017, up 30 per cent from 2016.