Ten communities to watch as municipal elections are held in Ontario

The race is on: Former Chief Planner Jennifer Keesmaat squares off against Mayor John Tory in Toronto, Kim Craitor runs in Niagara Falls, and Sarnia Mayor Mike Bradley hopes for round nine 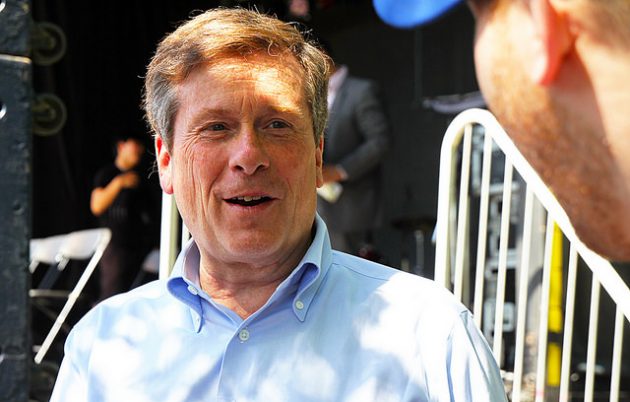 PHOTO: On the Hustings with John Tory/Alex Guibord

Voters across Ontario are casting ballots today to elect their next municipal governments. Here are 10 races to watch:

Canada’s most populous city initially appeared set for a sleepy election with no significant challenger to incumbent Mayor John Tory, and a 47-ward structure in place. But Premier Doug Ford’s abrupt decision to slash the size of the city’s council to 25 seats in the middle of the municipal campaign thrust the local race into the national spotlight. The city’s former chief planner Jennifer Keesmaat joined the mayoral race, becoming Tory’s main competitor. Meanwhile, the city’s reduced electoral map has resulted in veteran councillors being pitted against each other in their bids for re-election.

Patrick Brown, the former leader of Ontario’s Progressive Conservatives, is trying to make a political comeback by running for mayor in this city northwest of Toronto. He was forced to resign the party helm in January amid allegations of sexual misconduct he denies, months before the Tories went on to win a majority under Ford. Brown jumped into the mayoral race after his campaign to become the chair of Peel Region was cut short by Ford turning the post into an appointed role. Brown is up against incumbent Mayor Linda Jeffrey, who has slammed him as an outsider trying to use the mayor’s job to rehabilitate his political career.

This southwestern Ontario city will be the first in Canada to use ranked ballots in a municipal election. Unlike the widely used first-past-the-post system, ranked ballots will see voters pick their first, second and third choices. If no candidate receives an absolute majority on the first ballot, the last-place candidate is eliminated and their supporters’ second-choice votes are counted. That continues until one candidate receives more than 50 per cent. The city’s mayoral race itself is wide open as current Mayor Matt Brown isn’t seeking re-election. Full results aren’t expected on election night due to the time it’s expected to take for ranked ballots to be tabulated.

Former Liberal legislator Kim Craitor is running for mayor of the city. He faces three competitors including incumbent mayor Jim Diodati, who announced this summer that he was battling Hodgkin’s lymphoma. Craitor resigned from Ontario’s legislature in 2013 citing mental exhaustion. In 2014, he ran successfully for a seat on Niagara Falls city council. Since that time, it was revealed that Craitor was asked to resign by then-premier Kathleen Wynne after an internal investigation into allegations of sexual harassment that he denies. Diodati, meanwhile, recently told local media that doctors had declared him cancer-free.

Former Liberal transportation minister Kathryn McGarry, who lost her Cambridge riding to the Progressive Conservatives in the spring provincial election, announced this summer that she will seek the mayor’s job in Cambridge. McGarry, a former nurse, has promised to bring a collaborative approach to city hall and has listed tackling a lack of affordable housing as a key priority. She faces Doug Craig, a former teacher who has been the mayor of the city since 2000. He has said the opioid crisis is the top social issue facing Cambridge and has promised a multi-step plan to address the problem.

This northern Ontario city will elect a new mayor after incumbent Keith Hobbs announced in July that he would not seek re-election. That news came a year after Hobbs was charged with extortion and obstructing justice in July 2017. He has denied the allegations and the case is still before the courts. Former Liberal cabinet minister Bill Mauro, who was defeated in the spring provincial election after 15 years as a legislator, is amongst the candidates vying to succeed Hobbs.

Mike Bradley was first elected as Sarnia’s mayor in 1988. Since then he has won re-election eight times. Two years ago, Bradley was formally sanctioned by his fellow councillors after allegations surfaced that he bullied city staff. Bradley faces veteran city councillor Anne Marie Gillis in his bid for re-election. Gillis previously ran against Bradley unsuccessfully in 2000.

Mayor Jim Watson is seeking re-election in the nation’s capital after winning office in 2010 and again in 2014. He was previously a provincial legislator for the Ottawa region, elected in 2003 and again in 2007. Watson’s main contender is former city councillor Clive Doucet, who ran unsuccessfully for mayor in 2010.

Ontario’s longest serving mayor, 81-year-old Gord Krantz, will seek re-election in Milton this fall. Krantz, who has been on Milton council since 1965, has served as mayor since 1980. Businessman Wasim Ahmed and IT professional Mian Amir Naeem are running to unseat Krantz.