A hot idea: A Norwegian firm is using thermite, a metal-chemical powder that burns at around 3,000 Celsius, to melt and fuse steel pipe in oil wells with surrounding rock. The popular method of sealing inactive wells with cement has its drawbacks 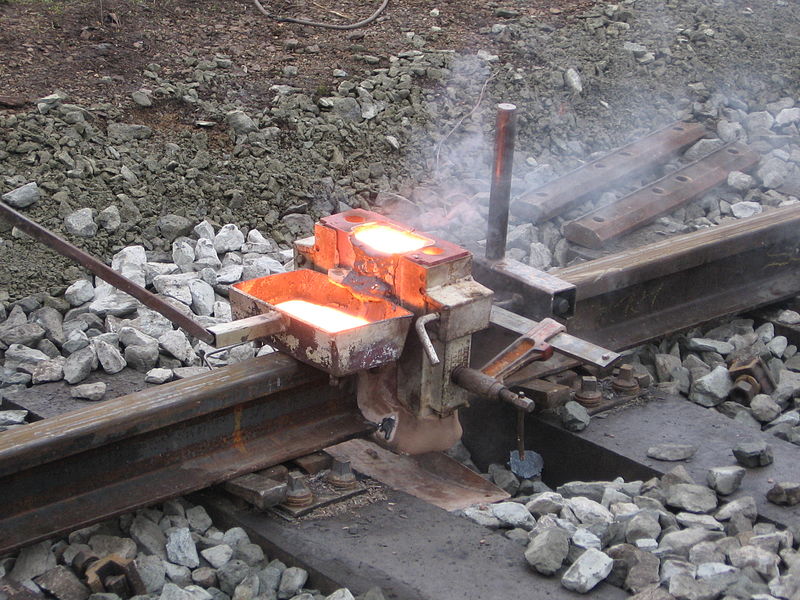 Thermite has been used for decades in exothermic bonding, a welding technique used to join railway track segments together by melting the steel ends. A similar technique is being used by Interwell Norway AS to fuse steel pipe to rock formations in oil wells. PHOTO: PetrS, via Wikimedia Commons

CALGARY—New technologies employing brute force as well as artificial volcanic action are being developed to better seal thousands of inactive oil and gas wells in Canada that are leaking methane, a greenhouse gas with an outsized impact on global warming.

The technology is advancing as federal and provincial governments embrace new goals to cut fugitive methane gas emissions that the industry concedes are difficult to measure, much less control.

A Norwegian company is working in B.C. and Alberta with a technology that creates a pool of volcano-inspired “artificial magma” underground to plug wells by melting and fusing the steel pipe with surrounding rock.

Michael Skjold said he came up with the idea to use thermite—a metal-chemical powder that burns at around 3,000 C—to seal oil and gas wells about eight years ago. It has advanced from backyard testing to a full-scale commercial test program to plug oil and gas wells.

“The reaction lasts for maybe two or three minutes and then it acts like magma that’s erupting from a volcano. A small man-made volcano. Very controllable,” said the innovation and business development manager for Interwell Norway AS during an interview in Calgary.

“Actually, we’ve used the volcano as inspiration because … we are creating something very similar to igneous rock and basalt formations.”

Thermite has been used for decades in exothermic bonding, a welding technique used to join railway track segments together by melting the steel ends. It’s considered safe to handle and store because it requires a substantial amount of electrical energy for ignition.

The Interwell technology was targeted at Norway’s offshore oil and gas industry but Skjold said Alberta’s inventory of nearly half a million wells, compared with Norway’s cumulative total of about 5,000 wells, convinced the company to focus on Canada instead.

The leaking well problem is also better known in Alberta than in Norway because it is more visible, he said, pointing out it’s hard to tell whether wells hundreds of metres deep in the cold and stormy North Sea might be leaking small amounts of natural gas.

Interwell has tested its technology on four Alberta wells and one in B.C. for producers Shell Canada, Imperial Oil and Canlin Energy in the past 18 months and plans to test eight to 10 more this year. Skjold said the testing has been successful so far, but the next tests will be performed on “problem wells,” where standard plugs have failed.

Most wells in Alberta that no longer produce profitable volumes are plugged with a cast-iron-and-rubber plug inside the steel casing and sealed by pouring cement on top, said Will Butler, lead, regulatory efficiency, for the Alberta Energy Regulator’s oil and gas operations group.

If a leak develops outside the casing, the standard fix is called “perf and squeeze,” where the casing is perforated from within and cement squeezed through the holes to make a better seal with the surrounding rock.

He said perf and squeeze is successful on the first attempt about half of the time, but often needs to be repeated, which adds to the cost.

Skjold said the Interwell technology is probably too expensive to compete on simple well plugs, but can likely be cost-competitive with perf and squeeze and similar methods.

The problem with cement is that it tends to shrink and pull away from the metal casing over time—wells that are sealed today may still leak in the future, said Dale Kunz, president of Winterhawk Well Abandonment Ltd.

The private Calgary company is developing a tool that can be lowered into a well and then expanded with enough force to make the steel casing bulge outwards to create a tighter seal with the surrounding rock.

He said natural gas can leak from oil wells, too, because producers often drill through gas-bearing rock to reach deeper oil-bearing formations. The shallower gas formations are normally sealed off with cement while the oil is produced but that cement seal can also deteriorate over time.

Between 80,000 and 100,000 of Alberta’s wells are inactive—in other words, no longer producing but not yet permanently abandoned and reclaimed—said Butler.

He said 10 to 12 per cent are probably leaking at least some natural gas.

“We know there are many, many hundreds if not thousands of wells that the industry doesn’t realize are leaking,” he said.

“They’ve been abandoned previously in the past, maybe decades ago, but not to the standards of today and they may be leaking again … Industry is of the mindset this is no longer their issue. But it is.”