Any number of scenarios could emerge from the summit in Vietnam. In the interim, here's the rundown of Wednesday's events 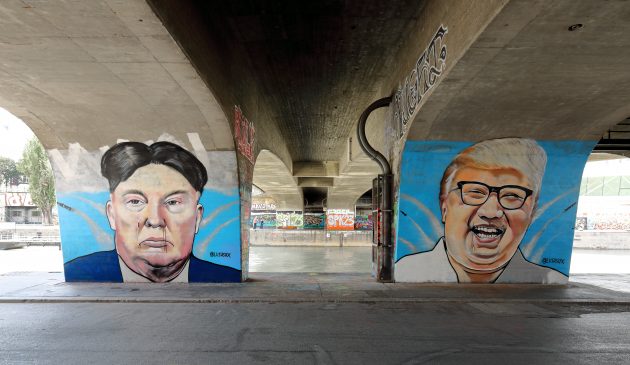 Perhaps the sheer mind-bending spectacle of seeing North Korea’s secretive, dynastic leader Kim Jong Un together with the mercurial U.S. President Donald Trump on the world stage for the first time, smiling and pressing the flesh, can never be replicated.

But here we are.

Eight months after the historic – but heavily criticized in some quarters as substance-free – summit in Singapore, the two men met in the Vietnamese capital for a one-on-one-discussion, followed by an intimate dinner.

Earlier in the day, Trump had diplomatic duties of the respect and courtesy to the host nation variety to attend to. But Kim, staying in Vietnam through Saturday, was secluded in preparation. Thursday sees the full gamut of high-stakes denuclearization bartering, with predictions of some significant and splashy American concessions in return for maybe not very much at all besides a global feeding frenzy on events there rather than Trump’s Washington woes.

Here’s a look at what happened in Hanoi on Wednesday:

– Trump has been fulsome, almost gushing, about his correspondence with Kim since their Singapore meeting. He told a political rally last fall: “He wrote me beautiful letters and they’re great letters. We fell in love.” Tonight, the once star-crossed leaders met again in the city previously carpet-bombed by American B-52s in 1972 for what was cast as a cozy “social dinner” with only two aides each at the table and translators. The venue was the Sofitel Legend Metropole – neutral hotel territory with each staying in different properties.

EARLIER DIPLOMATIC NICETIES FOR TRUMP, NO SIGN OF KIM

– Trump, who has zeroed in on socialism as a scourge in America to cudgel the Democrats with from now until the 2020 U.S. presidential election, was in congenial form as he met with the general secretary of the communist party and president of the Socialist Republic of Vietnam, Nguyen Phu Trong. Trump said the relationship between the U.S. and Vietnam is an “example” of what can become of North Korea if it gives up its nuclear weapons. “This is a great, great honour and I send our warmest regards from all Americans.” He touted trade deals being signed with Vietnam, including Boeing, as well his own stewarding of the U.S. economy, and added, “I very much appreciate the hospitality. It was really something special.”

– In an off-the-cuff moment, a smiling Trump briefly waved a Vietnamese flag at a meeting with Vietnam’s prime minister and prompted him to do the same with an American flag. As when Trump saluted a North Korean general in Singapore last June, it seemed both spontaneous and outside usual protocol.

– North Korean officials toured Vietnam’s scenic Halong Bay and a nearby industrial site while Kim spent his second morning in Hanoi inside a hotel preparing for his meetings with Trump.

– Hanoi’s mayor urged residents to be on their best behaviour during the summit, asking them to dress well and decorate the city with flags and flowers to welcome all of the visitors this week. With an estimated 3,000 journalists in Hanoi, the mayor said residents shouldn’t fleece the guests by “hiking prices of goods and services during the summit.”

THE MOOD IN PYONGYANG

A people with the tightest-controlled supply of information in the world is now getting used to hearing scripted news about Kim’s overseas travels and meetings with Trump, Chinese President Xi Jinping or South Korean President Moon Jae-in. But the stilted, and unfaltering, praise remains the same: “Our respected supreme leader comrade Kim Jong Un is now travelling far away to a foreign country and it makes me feel that I have to do my job as hard as I can to support and satisfy our supreme leader, comrade Kim Jong Un, ” said one citizen to The Associated Press.

– There are any number of scenarios that could emerge Thursday. With expectation set low by Washington for a major breakthrough on North Korea’s denuclearization, all of them appear to be centred on a grand Trump gesture that will grab the headlines and deflect from domestic turmoil at home, while Kim may offer some piecemeal agreement on how to start work on dismantling his country’s plutonium and uranium enrichment facilities. There is worry among experts that Trump will effectively leave North Korea recognized as a de facto nuclear power and lose the strongest card the U.S. has to ever get Kim to scrap all its nuclear weapons.

– The grand U.S. gesture? That could be a formal move toward a peace declaration ending the Korean War, which halted in 1953 with an armistice, not a peace treaty. Or there could be some easing of stringent and pervasive international sanctions that have helped keep the North Korean economy in a prolonged comatose state. Stay tuned.