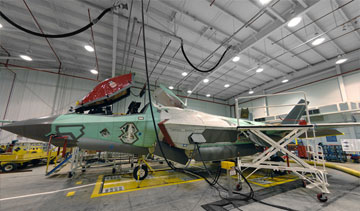 The F-35 Lightning II, or a fleet of alternative new fighters is one of many defence spending programs the government is currently mulling. Photo: BAE Systems

WASHINGTON—Canada isn’t committing to a massive boost in military spending, such as is being demanded of U.S. allies by Donald Trump as part of his presidential election platform.

Defence Minister Harjit Sajjan was asked during a visit to Washington about the request that NATO allies meet their stated goal of spending two per cent of GDP on the military.

Trump warned recently that allies should be prepared to defend themselves without any American help if they won’t bother following through on the international spending goal set years ago.

Sajjan expressed skepticism May 12 about the value of that two-per-cent yardstick, without committing to it or ruling it out. He said the government will seek a plan that works for Canada, and for its allies, through its current review of defence policy.

There are other ways to calculate a country’s contribution, he said.

“We had 158 soldiers who died&dmashsacrificed—in Afghanistan. Having been alongside them, contributions can be measured in many different ways,” said the minister, a veteran of the Afghan war.

“We as Canada will make a decision based on what type of military capability, size, composition, is going to be needed for Canada—but more importantly how we integrate with our multilateral partners.”

The minister’s language echoes that of the discussion paper put out by the government for its ongoing review, which suggests the two-per-cent target is a questionable measure for calculating military effectiveness.

Canada would need to double its spending to reach that target. It’s currently in the bottom tier of NATO countries in terms of spending, at one per cent of the national economy.

Reaching the target would require another $20 billion per year—the equivalent of nearly the entire federal employment insurance program, or half of health transfers to the provinces.

But NATO countries signed onto that target a decade ago. It’s been a source of annoyance to politicians in the higher-spending countries that only four nations have reached the target.

Trump made it a theme of his recent foreign-policy speech—attached to a threat.

“Our allies must contribute toward the financial, political and human costs of our tremendous security burden. But many of them are simply not doing so,” he said recently.

“We have spent trillions of dollars over time—on planes, missiles, ships, equipment—building up our military to provide a strong defence for Europe and Asia. The countries we are defending must pay for the cost of this defence—and, if not, the U.S. must be prepared to let these countries defend themselves.”

But he said the recent invasion of Ukraine has increased pressure on NATO allies.

“I think given the political climate, most NATO members who are currently below two per cent—i.e. most of them—will be reluctant to reduce military spending, and may increase it slightly, unless faced with poor economic conditions,” said Sam Perlo-Freeman, head of the Project on Military Expenditure at the Stockholm International Peace Research Institute.

“As Canada is one of the lowest spenders as a share of GDP, it would be in particular politically awkward to further cut spending. But the two-per-cent figure remains more of an aspirational target for many members, which is not going to be reached or approached in the foreseeable future.

“Of course if Donald Trump becomes President, then all bets are off, and if he means what he says about NATO being obsolete, then who knows.”

Sajjan is in the U.S. for meetings, and for a ceremony at the North American Aerospace Defence Command in Colorado.

That’s the home of the monitoring system for the U.S. missile-defence program, which is another part of the new Liberal government’s defence review.

Canada declined to join the program a decade ago but remains involved in monitoring the skies for incoming objects—and works in the same room in Colorado with U.S. officers involved in missile defence.

“I look forward to the discussion,” Sajjan said of missile defence.

“This is right now exactly what the defence review is trying to do—is making sure that we have a wide dialogue.”

The government is soliciting opinions for the review through July 31.