The Siemens’ Drummondville plant has produced electronic supplies since 1971. 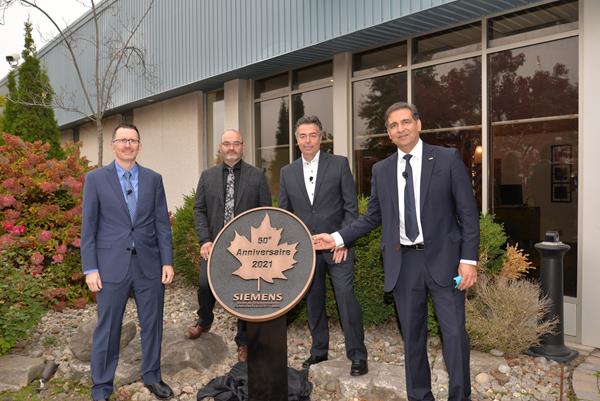 Siemens celebrates the 50th anniversary of its Drummondville manufacturing facility.

DRUMMONDVILLE — Siemens Canada marked the 50th anniversary of its Drummondville manufacturing facility with a look back at the plant’s milestones and accomplishments. Government officials joined Siemens employees, executives and customers, media and guest, the Mayor of Drummondville Alain Carrier for a hybrid in-person and virtual event.

The Siemens’ Drummondville plant opened its doors in 1971 and has since been supplying electrical products. Over the course of 50 years, the plant has sized, scaled and pivoted in response to shifting market conditions.

“In 2021, in a time like no other, I am proud to celebrate the 50th anniversary of Siemens’ Drummondville factory,” said Faisal Kazi, President and CEO, Siemens Canada in a company statement.

“The facility is an example of modern manufacturing, thanks in large part to a highly-skilled workforce, award-winning operational efficiency and progressive technology in-house.”

Siemens Canada expects Drummondville will continue to be a significant contributor to the domestic market, especially as the market moves to Industry 4.0. Whether supporting global entrants operating within Canada’s borders or helping local players succeed, Drummondville will continue to offer made-in-Canada products. In 2021 the plant will implement the first module of Siemens PLM software, a development intended to enhance supply and production planning. The facility will also embrace automation and robotics with the installation of cooperative robots in an effort to increase safety and security. The company also hopes that automation will optimize outputs and throughput of the plant.