The doors, music, windows and other interior features are controlled by three separate iPads. There’s a coffeemaker, a dryer for each glove and boot and—for those back-country trail cutters—a grill stored in the rear cargo area. 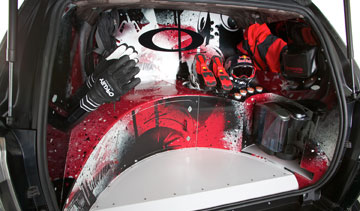 A coffeemaker, a dryer for each glove and boot and a mountable grill stored in the rear cargo area. PHOTO: Toyota

A Team Toyota member, Dumont is one of the best freestyle skiers in the world and will compete in the 2014 Winter Olympics in the first superpipe event. He holds the current world quarter-pipe height record, airing 35.5 feet out of a 38-foot quarter-pipe.

Dumont’s custom ride is one of four entries in this year’s Toyota Dream Build Challenge that invites Team Toyota athletes and partners to turn a vision into a real vehicle.

Vote www.ToyotaDreamBuild.com until Nov. 4. The victor will be announced at the SEMA Show in Las Vegas on Nov. 5 by Top Gear host and racing personality Rutledge Wood.