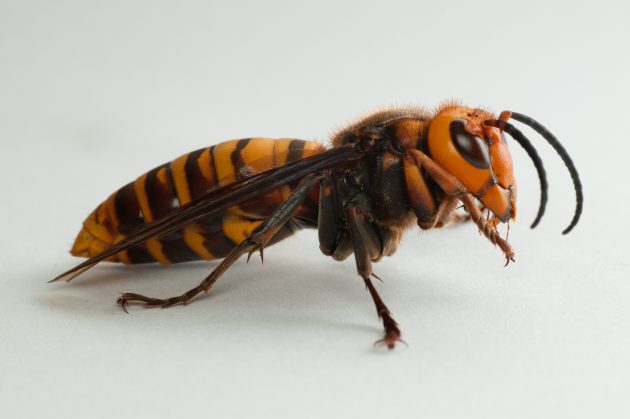 SPOKANE, Wash. — Workers from the state Department of Agriculture managed to destroy the first nest of so-called murder hornets discovered in the US without suffering any stings or other injuries, the agency said Oct. 26.

The nest, located in Whatcom County near the Canadian border, created concern because the Asian giant hornets are large and their sting can be lethal, especially if a person is stung numerous times. The hornets also pose a huge threat to honey bees that pollinate many crops.

“No one was stung and no one was even attacked that I am aware of,” said Sven-Erik Spichiger, an entomologist who directed the nest eradication Saturday near the town of Blaine.

Scientists recovered 98 hornets from the nest, including 13 that were captured alive in a net, the agency said.

“The WSDA is not selling any Asian giant hornet specimens,” spokesman Karla Salp said in response to questions from the public. The captured specimens will be given to various researchers, she said.

Another 85 Asian giant hornets in the nest were vacuumed into a special container and died. The nest, high up in an alder tree, was sealed with foam and shrink wrap and hornets that remained inside were asphyxiated, Spichiger said. The queen hornet was not collected, although she is expected to be inside the nest, Spichiger said.

“This is only the start of our work to hopefully prevent the Asian giant hornet from gaining a foothold in the Pacific Northwest.” he said, adding scientists will continue looking for a suspected one or two more nests in Whatcom County, near Blaine and Birch Bay.

Saturday’s operation began at about 5:30 a.m. with the team donning protective suits — purchased from Amazon — thick enough to prevent stingers from penetrating and setting up scaffolding around the tree so they could reach the opening of the nest, which was about 10 feet high. The team stuffed dense foam padding into a crevice above and below the nest entrance and wrapped the tree with cellophane, leaving just a single opening. This is where the team inserted a vacuum hose to remove the hornets from the nest.

Team members used a wooden board to whack the tree to encourage hornets to leave, the agency said.

When the hornets stopped coming out of the nest, the team pumped carbon dioxide into the tree to kill or anesthetize any remaining hornets. They then sealed the tree with spray foam, wrapped it again with cellophane, and finally placed traps nearby to catch any potential survivors or hornets who may have been away during the operation and returned to the tree. The work was completed by 9 a.m.

Entomologists will now try to determine whether the nest had begun to produce new queens who could establish additional nests.

WSDA will continue setting traps through at least November in hopes of catching any more Asian giant hornets still in Whatcom County.

WSDA has been actively searching for Asian giant hornet nests since the first hornets were caught earlier this year. The first confirmed detection of an Asian giant hornet in Washington was made in December 2019 and the first hornet was trapped in July of this year. Several more were subsequently caught, all in Whatcom County, which is in the northwestern corner of the state.

Asian giant hornets, an invasive pest not native to the U.S., are the world’s largest hornet and a predator of honey bees and other insects. A small group of Asian giant hornets can kill an entire honey bee hive in a matter of hours. The honey bees pollinate many of the crops in Washington’s multi-billion-dollar agriculture industry.

Asian giant hornets can deliver painful stings to people and spit venom. Despite their nickname and the hype that has stirred fears in an already bleak year, the world’s largest hornets kill at most a few dozen people a year in Asian countries, and experts say it is probably far less. Meanwhile, hornets, wasps and bees typically found in the United States kill an average of 62 people a year, the Centers for Disease Control and Prevention has said.

The real threat from Asian giant hornets — which are 2 inches (5 centimetres) long — is their devastating attacks on honeybees, which are already under siege from problems like mites, diseases, pesticides and loss of food.

The invasive insect is normally found in China, Japan, Thailand, South Korea, Vietnam and other Asian countries. Washington state and the Canadian province of British Columbia are the only places the hornets have been found on the continent.

The nest was found after the state Agriculture Department trapped some hornets and used dental floss to attach radio trackers last week to some of them.

When they found the nest on the property of a resident, researchers were disturbed to see a children’s playset only about 30 feet away, Spichiger said.

It remains unclear if the hornets will establish a toehold in Whatcom County from which they could spread of many portions of the United States, Spichiger said.

“It still looks optimistic that we are ahead of this,” he said. “We still can keep this out.”

“It is worth the battle,” he said.