In a bellicose speech, the Conservative leader also said he would get tough on China and Russia 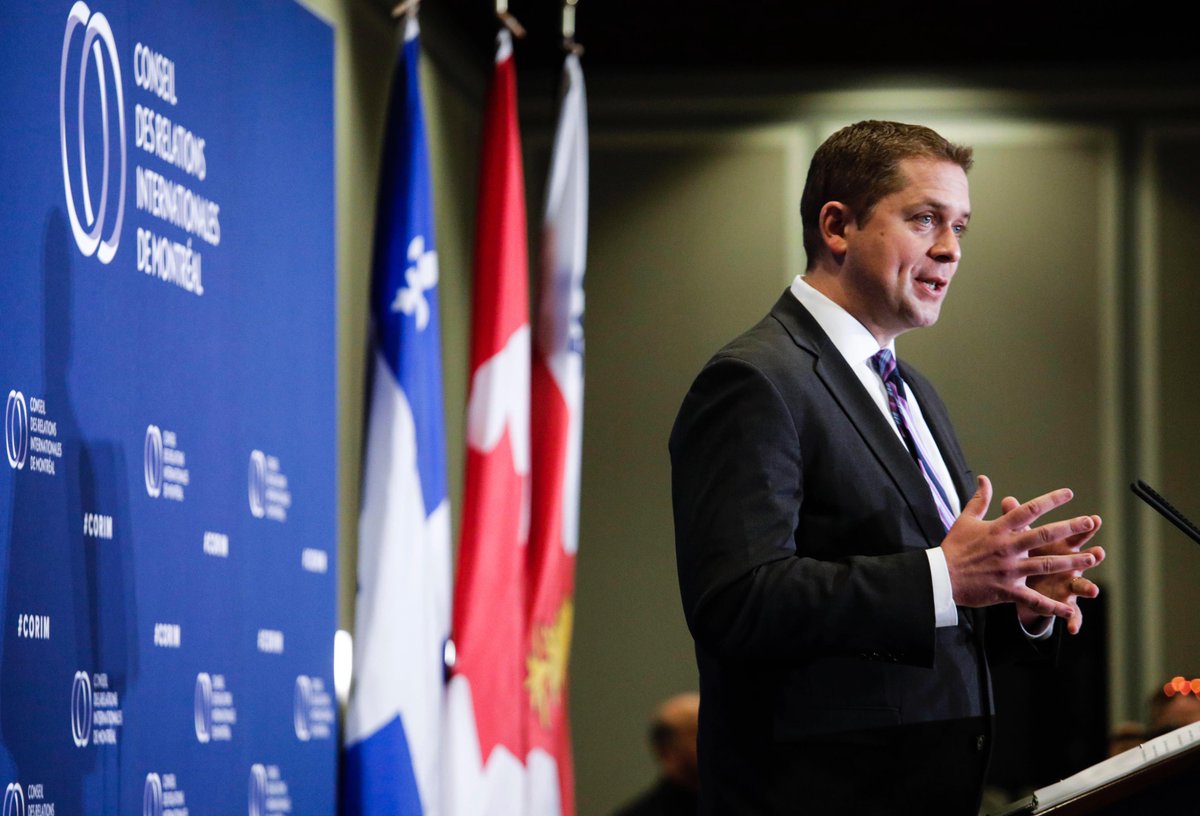 Scheer’s speech in Montreal was a table-setter for the upcoming federal election, the first of several major policy statements the Conservatives say he will make in advance of the fall campaign.

“I will re-open the Office of Religious Freedoms and stand up for religious minorities all around the world. And I will recognize the fact that Jerusalem is the capital of Israel,” Scheer said, in a portion of the speech not included in the prepared text his office distributed.

Afterward, as he exited the Marriott Chateau Champlain’s ballroom followed by a phalanx of journalists, the Conservative leader said what such recognition would mean for the Canadian Embassy: “That obviously would include making sure that Canada’s representation there is in Jerusalem and we’d work with the government of Israel to accomplish those types of things.”

The promise to recognize Jerusalem as Israel’s capital reaffirmed a pledge Scheer first made more than a year ago—but he didn’t include a promise to move the embassy then.

Jerusalem is disputed territory between Israel and the Palestinians and its status is a pivotal question in any peace talks. Israel says Jerusalem is its capital and maintains nearly all its own national government institutions there, but nearly all the embassies in Israel are in Tel Aviv, 70 kilometres away.

Moving Canada’s embassy to Jerusalem would echo U.S. President Donald Trump, who has already angered Palestinians by moving his own country’s mission, and would align Canada more closely with Israel than the last Conservative government of Stephen Harper did.

Canada’s official position on Jerusalem now is that its status can be resolved “only as part of a general settlement of the Palestinian-Israeli dispute. Canada does not recognize Israel’s unilateral annexation of East Jerusalem.”

Then Progressive Conservative prime minister Joe Clark promised to move the Canadian Embassy to Jerusalem in 1979, sparking recriminations against Canada at the time. Clark gave up on the idea after a special report he commissioned advised that the move could harm prospects for peace.

Bessma Momani, a University of Waterloo analyst of the Middle East, said Scheer’s proposal is controversial and he needs to be mindful of how it backfired on Clark.

“Mr. Scheer would be advised to better understand why this will further inflame the region and not to mention do little to advance the two-state process,” she said.

Scheer also pledged to join the U.S. ballistic-missile defence program—one that previous Liberal and Conservative governments chose to not to join. The United States has gone ahead with the missile-shield program without Canada.

He spoke of the threats posed by non-democratic actors such as China and Russia.

“I will deal with China with eyes wide open,” Scheer said. “Although China is a primary, and certainly the strongest, propagator of authoritarian values, Russia remains a serious threat.”

Scheer’s sprawling speech acknowledged the need to do more to combat climate change, something Scheer said he would have more to say about in a speech on the environment later.

There was also a sign of magnanimity in his proposal to more closely involve opposition parties in the military’s strained procurement process if he becomes prime minister.

But Scheer also launched personal attacks on Trudeau, deriding his 2015 declaration that “Canada is back” on the world stage.

“Canada had, in fact, not gone anywhere,” Scheer said. “And the profound arrogance of Mr. Trudeau’s words foreshadowed how the new prime minister would conduct Canada’s foreign affairs: with style over substance.”

He called Trudeau’s trip to India last year “the most disastrous” ever by any Canadian prime minister.

“Critiquing Trudeau makes perfect sense. He personalizes the Liberal foreign policy and capitalizes on the vivid debacle that the India trip symbolized,” said Momani. “This messaging will resonate with voters but I’m not sure his vision articulates how he will fare better on tackling the thorny issue of continuing economic ties with autocratic regimes like China and Saudi Arabia.”

Foreign Affairs Minister Chrystia Freeland said Trudeau has been an asset to her international diplomacy every day.

“Knowing the strength, the appeal, the power of Justin Trudeau, and being able to say to my counterparts ‘I can have the prime minister call your leader’—that is just hugely, hugely valuable capital.”

The Liberals fired off their own statement before Scheer had even uttered a word.

“Whether it’s Andrew’s Scheer’s endorsement of Brexit chaos, skepticism on climate change, corrosive rhetoric on immigration, or uncertainty on NAFTA, the Conservative plan amounts to risk and uncertainty that would hurt Canadians and our economy,” said Liberal MP and Quebec campaign co-chair Pablo Rodriguez.

Scheer’s remarks made a passing reference to the challenges of dealing with a mercurial American president but they shied away from any direct mention of President Trump.

“The Canada-United States relationship transcends the personalities of those who occupy each respective office. And its longevity is crucial to our respective peace and prosperity. It must be strengthened,” he said.

The audience for the speech to the Montreal Council on Foreign Relations included SNC-Lavalin, whose corporate name was affixed to one of the tables in the Montreal hotel ballroom where Scheer spoke and whose logo was on some of the event’s posters.

Scheer has accused Trudeau of a cover-up in the ongoing controversy over whether the government should have given the firm a deferred prosecution agreement over the criminal charges it faces for alleged bribery in Libya.

Brock Harrison, a spokesman for Scheer, said the event was not a party fundraiser and the firm won’t be giving the Conservatives any money.

Two representatives of the Montreal council could not answer questions about the event, including the cost per ticket, and who would receive the proceeds.