The Liberals won 157 seats to the Conservatives' 122 even as the Tories claimed 34.4% of the popular vote compared to the Liberals' 33.1% 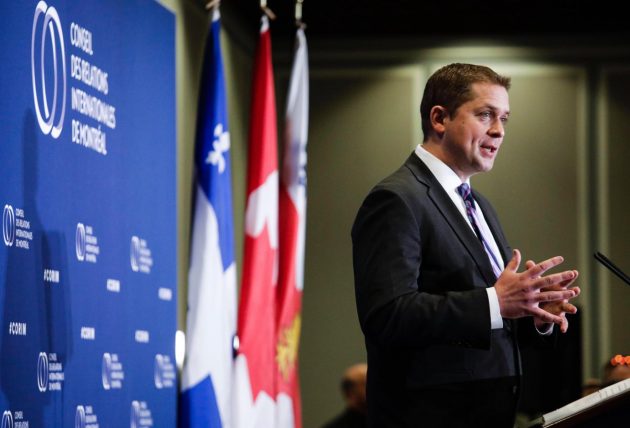 REGINA—Conservative Leader Andrew Scheer offered the Liberals no help Tuesday to try and piece together national unity after an election contest that’s left the country divided on regional lines.

Scheer seized on his party’s success in the popular vote, the complete annihilation of the Liberals in Alberta and Saskatchewan and the re-emergence of a strong Bloc Quebecois as evidence that whatever pleasure the Liberals might take from Monday’s night results has also come at a cost.

Trudeau spent 40 days demonizing the provinces and anyone else who disagreed with him, said Scheer. The choice is his about what happens next.

“We’re going to do everything we can to fight for a united Canada.”

But the results Monday night also showed a divide for the Conservatives to contend with.

Scheer will face a potential leadership review in six months, at the party’s convention in Toronto next year.

He, and those closest to him, were adamant Tuesday that he will remain in place, though there was grumbling among those farther away from his orbit about the party’s failure to capitalize on the multiple scandals around the Trudeau Liberals.

Conservatives say they threw all the resources they had at this election, but always knew the strong drive for change that unseated them in 2015 wasn’t a powerful enough force, at a national level, to take Trudeau down.

After 2015, the plan and budget they put in place had always been set with a long game in mind: a potential minority in 2019, and then a majority after that government fell, party sources said on background Tuesday, granted anonymity to talk about internal strategy.

“We’re going to work as hard as we can in the coming days to prepare the groundwork for the next campaign,” he said. “This is a first step.”

The New Democrats and Bloc Quebecois held their cards close, and did not discuss any negotiating points they plan to raise with the Trudeau government after Monday’s federal election reduced the Liberals to a minority.

NDP Leader Jagmeet Singh said Tuesday he won’t negotiate an arrangement with the Trudeau government in public. His party won 24 seats, a worse showing than the 44 it won in 2015, and it was nearly wiped out in Quebec where it clung to just one.

But Singh said he will fight for the objectives he laid out in the federal election campaign, including helping students, moving ahead with publicly-funded pharmacare and fighting climate change.

“I am hoping that Mr. Trudeau respects the fact there’s a minority government now which means we’ve got to work together,” Singh said in Burnaby, B.C.

With Liberals just 13 seats shy of a majority, the fourth-place NDP still holds some sway with the resurrected Bloc Quebecois that will return to Ottawa with 32 seats.

Bloc Quebecois Leader Yves-Francois Blanchet said it’s not his job to make the new Parliament work, and that his guiding priority will be promoting Quebec interests.

He said he will not drive a sovereignty agenda, saying that will be dictated by a rhythm and timing dictated by the Quebec people.

“I expect us to have quite a good leverage,” said Blanchet.

Trudeau showed up at a Metro station in his Montreal riding of Papineau Tuesday to thank his constituents after the Liberals secured a minority-government victory.

Related: Trudeau thanks morning commuters in his Montreal riding after election victory

Only a few hours after he left the stage at Liberal party election headquarters in Montreal, Trudeau stood at the top of the station’s escalators to shake hands with commuters, thanking them as they congratulated him on his electoral success and posing for photos when asked.

Trudeau made a similar appearance the morning after the Liberals won the 2015 election, surprising commuters in Montreal who were not expecting to see the prime minister on their way to school or work.

Unlike Scheer, Singh and Blanchet, Trudeau was not scheduled to hold a news conference Tuesday.