Running on fumes: North Korea’s only auto plant, where just the badge is local

As the isolated country's economy has sputtered, the streets of Pyongyang offer some insight into how its auto industry has fared 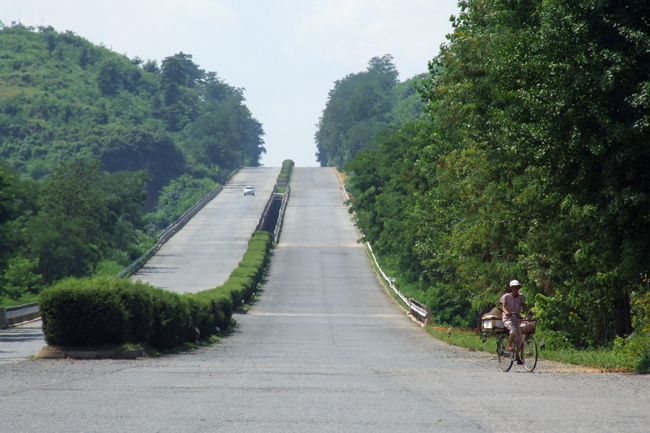 Outside the country’s capital passenger vehicles are few and far between and well beyond the means of all but the most elite citizens. PHOTO: Nicor, via Wikimedia Commons

The streets of Pyongyang are more crowded than ever, but Pyonghwa, whose sole factory just south of the capital was designed to produce as many as 10,000 cars a year, appears to be stuck in neutral. Experts say just about everything its pigeon hood ornaments are attached to these days comes straight from China.

“I am afraid that since November 2012 there has not been any production of a Pyonghwa vehicle,” said Erik van Ingen Schenau, an expert on the Chinese automobile market and author of a book documenting North Korean vehicles. “The newer models with the Pyonghwa badges are all Chinese-made.”

If any assembly is being done locally, it is likely very small scale—such as putting on tires, inserting batteries or finishing the cars’ interiors, he said. Recent satellite imagery on Google Earth shows no cars in the lots around the factory.

Production and resources have always been focused on military vehicles or trucks rather than passenger cars, which outside of Pyongyang are still few and far between and well beyond the means of all but the most elite citizens. To further complicate matters, U.N. sanctions announced in March last year have made it harder for North Korea to get the parts needed for its assembly lines.

Pyonghwa itself is a remnant of a less-tense time, when South Korean investment aimed at improving ties through economic engagement was encouraged—in this case as a joint venture with the late Rev. Sun Myung Moon, founder of the Unification Church.

It was the first and is probably still the only company allowed to use billboard advertisements.

“Pyonghwa Motors will take the lead in building a bridge between South and North,” former CEO Park Sang Kwon, a Korean-American who spearheaded the effort from the South to create the company, said in a statement on its website, which hasn’t been updated since 2012.

The promise of Pyonghwa, which means “Peace” in Korean, sputtered and stalled as relations between Pyongyang and Seoul soured and the North embarked down its path of becoming a nuclear power.

Production of a Pyonghwa version of the Fiat Siena began at its Nampo plant in 2002, with 137 vehicles assembled from component “kits” shipped in from abroad. Output peaked in 2011, when the plant assembled 1,820 vehicles, then soon crashed when the South Korean side of the venture pulled out.

A chart showing the release years of Pyonghwa’s 12 models is posted on a wall at the dealership—and stops abruptly at 2010. The company displayed 36 cars, trucks and pickups at the Pyongyang Spring International Trade Fair in 2013, but van Ingen Schenau, who is director of the France-based China Motor Vehicle Documentation Centre, said all were Chinese.

“Most of them were made by FAW in Changchun or FAW-Volkswagen,” he said.

FAW—First Auto Works—is one of China’s ‘big four“ state-owned automakers. With its headquarters in Jilin Province, adjacent to the North, the state-owned FAW Group is particularly well-placed to tap into the North Korean market.

But it’s by no means the only player in the game.

Private automaker Hawtai Motor Group is one of the most visible, supplying hundreds of cars for the burgundy and gold fleet of “KKG” taxis that began appearing in Pyongyang in 2014. Another Chinese brand, BYD, flooded the city’s streets with cars for a competing fleet of green and yellow taxis in 2013.

The streets of Pyongyang offer some insights into the state of the North Korean economy.

Black Mercedes limousines for senior officials and blue—North Korea famously bought, but failed to pay for, 1,000 of the Swedish cars in 1974—are a common sight. Trams, some built in the former Czechoslovakia, and trolleys are another. The Pyongyang Trolleybus Works recently introduced the 170-passenger Chollima 091, with Chinese axles.

There is a considerable flow of long-haul buses, trucks and smaller vehicles that transport people and goods around for a fee. The practice isn’t openly approved of by the government, but it’s become a commonplace entrepreneurial side-business.

Stiffer pressure on Beijing to clamp down on trade with Pyongyang could crimp the growth in traffic. But if sanctions and political instabilities can be overcome—two very big ifs—Chinese capital could start up where South Korea’s Pyonghwa experiment left off.

FAW seemed to be heading in that direction when in 2013 it was widely reported to have signed a memorandum of intent to build a factory in Rason, a special economic zone near the Russian and Chinese borders.

But like many planned projects in the North the status of the plant is uncertain.

Company officials were not immediately available for comment. BYD and the Chinese Association of Automobile Manufacturers also had no comment.