Rogers spends nearly half the $3.47B raised by wireless spectrum auction

Canada's three national carriers were only allowed to bid on 64 of the available licences in this year's auction. Rogers won 52 of the licences it was eligible to bid on 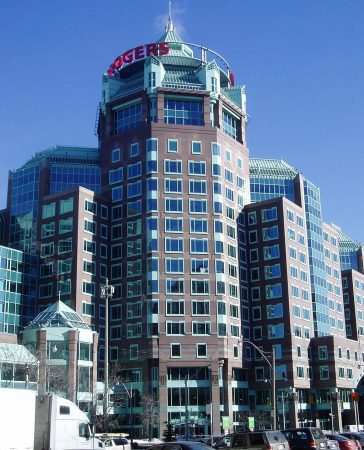 PHOTO: he Rogers Building, the headquarters of Rogers Communications/SimonP via Wikimedia Commons

TORONTO – Rogers Communications will spend $1.72 billion to acquire spectrum licences from the federal government, making it by far the biggest spender in a hard-fought auction that pitted Canada’s wireless companies against each other.

The Canadian treasury will get a total of nearly $3.47 billion from auctioning 104 licences to Canada’s wireless networks, which are racing to get ready for fifth-generation technology that will roll out over a decade or so.

This year’s auction was for the 600 megahertz band of frequencies, which can cover large areas and easily penetrating buildings.

Next year’s auction will be for 3,500 MHz licences, which are even more valuable because they’re more widely used in fifth-generation networks around the world.

Canada’s three national carriers were only allowed to bid on 64 of the available licences in this year’s auction because of restrictions imposed by the Department of Innovation, Science and Economic Development.

ISED Minister Navdeep Bains said some of the licences were set aside for smaller carriers in order to stimulate competition which, he said, will bring down consumer prices.

“I’m confident this strategy – in the short, medium and long-term – will benefit consumers.”

He said the money from the auction will be added to the federal government’s general revenue incrementally over the life of the licences – generally 20 years.

Rogers won 52 of the licences it was eligible to bid on, covering territorial blocks in southern and northern Ontario, northern Quebec, Atlantic Canada, Manitoba and the three territories.

“This spectrum is vital to the deployment of 5G in Canada and we are well-positioned to bring the very best of 5G to Canadians,” Rogers chief executive Joe Natale said in a statement.

“We went into this auction with a clear, disciplined plan and seized this opportunity for the benefit of our customers and shareholders.”

Telus Corp. spent $931.2 million for 12 licences, making it the second-biggest spender in the 600 megahertz auction.

Freedom Mobile – which operates networks in Ontario, Alberta and British Columbia – spent nearly $492 million for 11 licences in its territories, making it the third-highest spender overall.

The CEO of Shaw Communications, which owns Freedom, said it’s becoming a true alternative to the incumbents.

“The addition of this 600 MHz low band spectrum will not only vastly improve our current LTE service but will also serve as a foundational element of our 5G strategy providing innovative and affordable wireless services to Canadians for years to come,” Brad Shaw said in a statement.

Quebecor Inc.’s Videotron – which operates in Quebec – spent $255.8 million. The rest of the licences went to a number of smaller companies, including Bragg (Eastlink), TBayTel, SaskTel, and Xplornet.

BCE Inc.’s Bell Canada – owner of one of the three national wireless businesses – said it decided not to acquire any of the available licences.

“Given the supply of other low-band spectrum that Bell already possesses, 600 MHz is not required for Bell to deliver broadband 4G and 5G services,” it said in a statement.

The company noted that its main U.S. peers have also chosen not to own any 600 MHz spectrum in their markets.