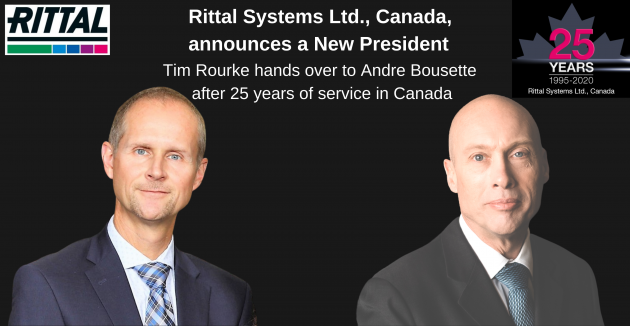 Tim Rourke joined Rittal in 1995, as an Outside Sales Representative in Eastern and Northern Ontario, and he moved through a series of roles before taking over as President in 2015. Tim was an integral part of Rittal’s growth and customer excellence, as they complete 25 years in Canada in 2020.

André Bousette has been with Rittal Systems Ltd., Canada for 25 years. André joined Rittal in 1990 as an Outside Sales Representative in Montreal and surrounding area. In 1997, André became the Regional Sales Manager for Quebec. As National Sales Manager from 2004 to 2008, André was key in the development of many of Rittal’s largest and most important channel partners. André has over 30 years’ of experience in the Manufacturing and Automation fields.

Tim Rourke said, “I am proud to have worked with André for nearly 30 years. I extend my personal, heartfelt congratulations and deepest appreciation to André, and I am confident that Rittal Systems Ltd. will grow to new heights under the capable leadership of André Bousette.”