Davie's converted civilian vessel is at the centre of the Royal Canadian Navy's sole-source procurement battle, as well as an RCMP investigation into Canada's former naval chief 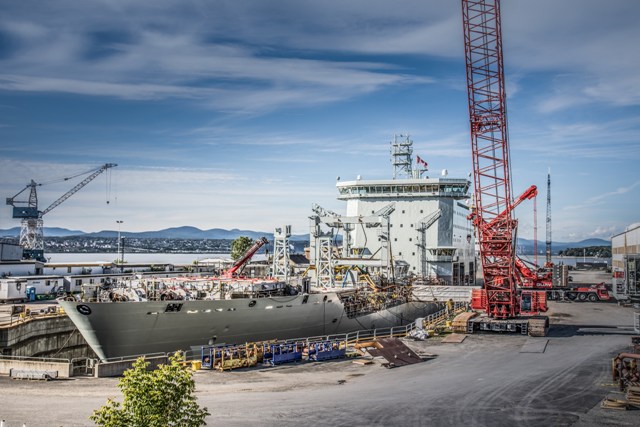 Work is almost finished on the $700 million project, with only sea trials left before the ship is turned over to the navy around Christmas. PHOTO: Chantier-Davie

OTTAWA—The Quebec shipyard at the centre of the RCMP investigation into Vice-Admiral Mark Norman is talking vindication—both for it and Norman—as it inches closer to delivering a new supply ship to the navy.

Chantier-Davie was set to host a lavish ceremony in Levis, Que., on July 20 to unveil the MV Asterix, the former civilian ship it is converting into a temporary supply vessel for the Royal Canadian Navy.

The unveiling ceremony is an important milestone for the $700-million project, with work almost finished and only sea trials left to be done before the ship is turned over to the navy around Christmas.

Alex Vicefield, CEO of Inocea, the multi-national conglomerate that owns Davie, said the ceremony is also a big win for the shipyard, which has struggled for years to win work from the federal government.

“This is a fantastic celebration for us,” he said in an interview. “It goes to show we’re not just big talkers, and we actually can deliver on our promises.”

Norman was head of the navy when the former Conservative government gave Davie the interim supply-ship project without a competition in summer 2015.

The move came after the navy was forced to retire its only two resupply ships early, leaving a gap until new permanent replacements could be built around 2021.

Norman had been a proponent for the project and the fact the ship is nearing completion represents a degree of vindication for him, Vicefield said.

“It basically shows that what he said was right,” Vicefield said.

“He’s a guy who said: ‘I’m not getting ships. I need ships. People’s lives are at risk. We need something. And this makes the most sense of all.”’

However, this past January, Norman, who had been promoted in August 2016 to vice chief of defence staff, the military’s second-highest position, was suddenly relieved of duty without explanation.

Court documents later showed the RCMP was investigating him on suspicion of having leaked cabinet secrets to Davie in November 2015.

The Mounties alleged Norman was upset that the new Trudeau government was reconsidering the interim supply ship contract, and that he worked with Davie to pressure the Liberals into staying the course.

Norman remains suspended but has not been charged with any crime. The allegations in the documents have not been tested in court, and Norman’s lawyer has denied her client did anything wrong.

The Liberal government ultimately decided to proceed with the project.

Vicefield and Spencer Fraser, the CEO of Federal Fleet Services, which is actually overseeing the interim supply ship project, suggested Norman had been unfairly targeted for investigation.

Among the documents obtained during the RCMP investigation and filed with the court were email exchanges between Fraser and Norman, which Vicefield described as perfectly normal.

“He had an official role in this project, which was project leader,” Vicefield said in the interview. “So just this assumption that there was some sort untoward activity by him communicating with us is totally ridiculous.”

Fraser noted that Ontario Superior Court Justice Kevin Phillips said in April when he agreed to unseal the documents that the emails did not represent evidence of wrongdoing.

The RCMP has refused to comment on the investigation.

Vicefield and Spencer said they have not heard anything in months, but hoped for a speedy resolution.

“It’s a lot of noise, and really no substance,” Vicefield said. “I hope that it’s cleared up one way or the other, just for the sake of the admiral, quite rapidly.”

The navy won’t actually own the Asterix when it is complete, but will instead lease it for five years, with a second five-year option, though Fraser said the company is prepared to sell the ship to the navy on request.

The vessel will also include a mixed crew of civilians and military personnel, which is unusual for a naval ship.