The Pyrowave technology platform is the result of using microwaves to manufacture chemicals more efficiently and with a lower carbon release than traditional processes. 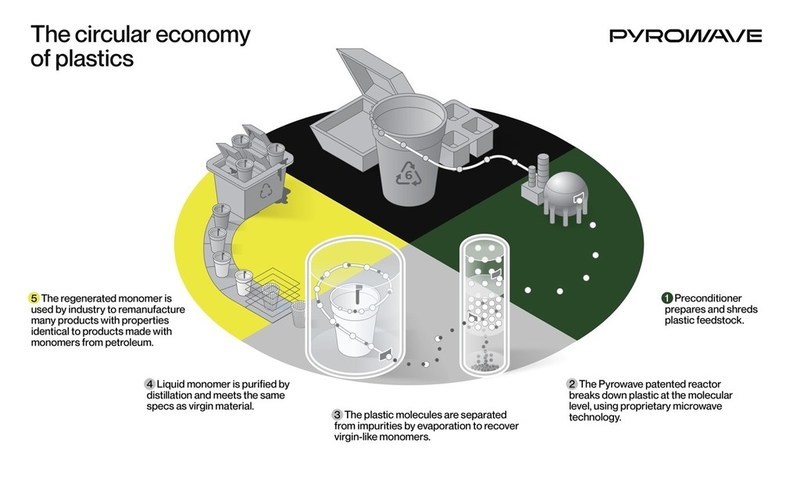 MONTREAL — Pyrowave, a company involved in the electrification of chemical processes based on low carbon footprint microwaves, announces the Quebec Government’s financial support through the ESSOR Program, administered by Investissement Québec. This financial support in the form of a $7 million credit facility will help Pyrowave expand its pilot plant and its Centre of Excellence in Microwave Technologies located in Salaberry-de-Valleyfield, hire new talents, and continue developing and improving its technologies.

The purpose of the ESSOR Program is to accelerate the growth of promising Quebec companies to help them become leaders in tomorrow’s low-carbon and circular economy. This investment is the culmination of a series of announcements made by Pyrowave in recent months, including a joint development agreement with Michelin, a French tire corporation and a world leader in the development of sustainable materials. The support announced on Nov. 19 will also help the firm consolidate its partnerships with local suppliers by leveraging the talent of Quebec manufacturing companies to commercialize its platform.

The loan granted by the Quebec Government will help support and improve a team of researchers, creating a dozen jobs, in addition to attracting and retaining talent in Quebec. As part of this financing, Pyrowave will also repatriate its head office to Quebec to consolidate its operations.

“We are proud that the government recognizes and supports the new generation of companies at the source of green growth in Quebec, specifically in the circular economy of plastics, a global issue that provides international growth opportunities”, said Jocelyn Doucet, CEO of Pyrowave. “Through talents, technological know-how and geographic positioning, the Province of Quebec is a strategic location to support our growth and development”, he continued.

“In the context of economic recovery and the fight against climate change, businesses must innovate and focus on the circular economy in order to be competitive. The recycling technology of certain plastics developed by Pyrowave has a tremendous potential to reduce Quebec’s environmental footprint and promote our know-how internationally”, said Pierre Fitzgibbon, Minister of the Economy and Innovation and Minister responsible for Regional Economic Development.

The Pyrowave technology platform is the result of using microwaves to manufacture chemicals more efficiently and with a lower carbon release than traditional processes because it uses electricity which can be entirely renewable.

By continuing its development within its Microwave Technology Centre of Excellence, Pyrowave technology aims to become a platform for the next generation of sustainable processes through a portfolio of patents, contributing to a lower carbon manufacturing industry.