Prinoth gets ahead of the competition with industry-first design

The first snowfall of the winter inevitably sparks excitement, but perhaps not as much as it does for Granby, Que.-based Prinoth North America Ltd., a manufacturer of snow grooming equipment and tracked utility vehicles.

Prinoth snow groomers—manufactured in Canada—can be found on ski slopes in North America and beyond, and among other triumphs, played a key role in keeping the Sochi slopes in top condition for the 2014 Winter Olympics.

This season will be especially inspiring for Prinoth as it chalks up an industry first—launching a fleet of clean snow groomers to meet new regulations set by the US Environmental Protection Agency (EPA) in 2012. 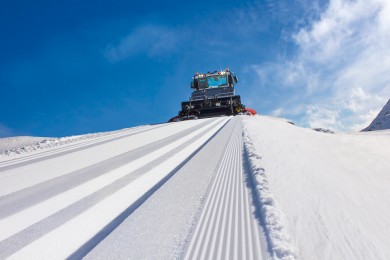 “We’ve been working on this for many years and are really proud to be the first in the market. It forced us to completely redesign our whole groomer line-up to meet these new EPA clean rules.”

Part of Prinoth’s Clean Motion philosophy, the groomers meet the Stage IV/Tier 4 final standard, the current benchmark for the cleanest exhaust emissions in mobile machinery. The models offer more engine power and higher torque while reducing exhaust emissions by up to 91 percent.

Design for assembly
Innovations such as Clean Motion aren’t new to Prinoth, a subsidiary of the Leitner group with headquarters in Sterzing, Italy. The company’s roots trace back to 1951, when race car driver and design engineer Ernst Prinoth opened an automotive garage. Shortly after he developed snow groomers—well-suited to the wintry conditions of his South Tyrolean home.

The centre of competency for snow groomers is still located in Italy, though Prinoth has product developers and engineers in Canada as well, with frequent interaction and travel between the two teams.

Prinoth arrived in North America through the acquisition of the snow groomer range from Canadian manufacturer Camoplast (previously Bombardier) in 2005, and then acquired its tracked utility vehicle line in 2009.

Perreault had been working with Bombardier Recreational Products, in a range of successive roles—purchasing manager, Six Sigma Master Black Belt, and product development manager, before becoming purchasing director with Camoplast.

He leverages this broad, multifunctional experience to optimize manufacturing at Prinoth. Over the past 10 years, the company has shifted from a somewhat disconnected engineering and assembly process to a more collaborative approach.

As a result, the engineering department often uses feedback from the shop floor to modify original designs, making them easier to assemble without impacting functionality, he adds.

Focusing on its core
For many manufacturers, shifting regulations are seen as a liability and added cost. Because Prinoth had set up a collaborative design-for-assembly process, it was in a far better position to undertake the major changes to the snow groomer line—getting Clean Motion to the market before competitors.

Another success strategy cited by Perreault is the importance of focusing on the company’s core competencies—product design, innovation and assembly. As orders increased, Prinoth was bumping up against capacity constraints in areas such as welding and machining.

“We used to be very vertically integrated and through the years we’ve started to outsource manufacturing that we had done inside to our supply base because with the growth we’ve been having we needed more capacity internally for the assembly,” he says.

“This year we’re doing our last transformation by basically passing on to the supply base the manufacturing and welding and concentrating only on assembly. We are revisiting how we’ll take our assembly line to the next steps to be able to continue our growth and to focus on what we’re strong at.”

Lighter than usual snowfall in areas such as the US west coast is having a dampening effect on Prinoth’s groomer business, but fortunately, its tracked utility vehicles are going strong. Realizing this market will fuel Prinoth’s growth, the company invests in research to continuously improve its offerings. 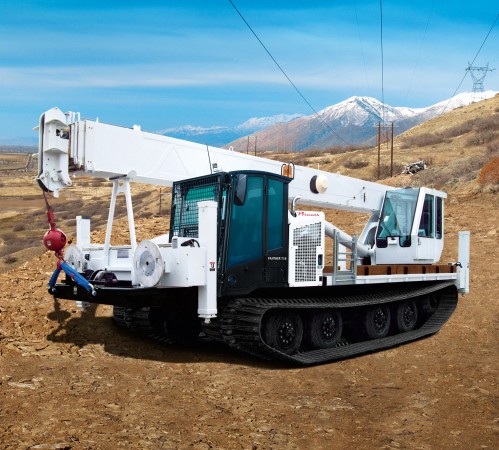 In October 2015 Prinoth launched the Panther T16 tracked utility vehicle with a new innovation called the R.A.D. (Rapid Attach Design) chassis. The design—exclusive to Prinoth—significantly reduces the time and effort required to add equipment such as aerial devices and cranes. The Panther T16 is the newest addition to Prinoth’s Panther series of tracked carriers.

The vehicle are used to transport equipment and materials such as man lifts and cranes to otherwise inaccessible areas. Users of the tracked vehicles often add implements and R.A.D. will make these additions much easier, Perreault explains.

“We worked hand in hand with the equipment manufacturers and they gave us input on what could make their lives easier…The new frame concept really is revolutionizing the way manufacturers are going to be able to work on these types of vehicles…saving hundreds of hours on installation.”

Being close to customers and coming to know their challenges is a key factor in Prinoth’s success. Also important is its focus on exporting. Perreault refers to business development efforts in Australia, Mexico, and South America, along with established footholds in numerous other markets outside Canada.

With cutting-edge technology and efficient product development and assembly processes, Prinoth will continue to present as a top competitor in markets at home and around the world.

This article is part of the Industrial Edge Showcase, featuring case study articles and the latest news on manufacturing innovation.