This follows the airline's announcement last month that it ordered up to 80 Embraer E195-E2 aircraft, including 30 firm commitments and purchase rights for another 50. 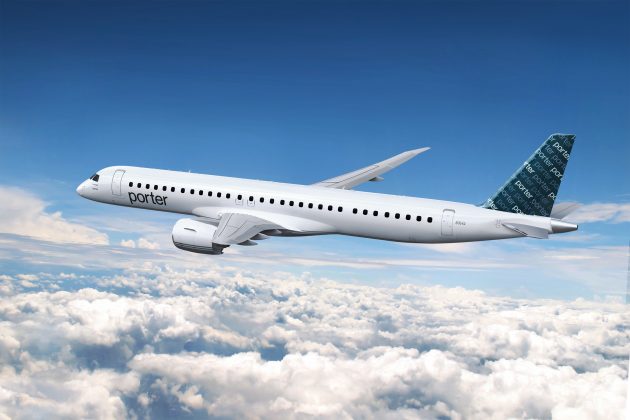 TORONTO — In preparation for a planned North American expansion, Porter Airlines has agreed to an aircraft aftermarket support program with Embraer. This follows the airline’s announcement last month that it ordered up to 80 Embraer E195-E2 aircraft, including 30 firm commitments and purchase rights for another 50. Deliveries begin in the second half of 2022, as Porter prepares to grow beyond its current regional eastern Canada — and U.S. — focused route network to include routes to the west coast, southern U.S., Mexico and the Caribbean.

The agreement is effective for up to 20 years of airframe heavy maintenance checks, technical solutions and access to the Pool Program, which includes component exchanges and repair services for hundreds of items for Porter’s E2 fleet. Currently, the Pool Program supports more than 50 airlines worldwide.

“This service agreement with Embraer is fundamental to Porter’s operational success,” said Michael Deluce, President & CEO, Porter Airlines. “Embraer’s expertise and support is crucial as we start E195-E2 operations, since no one knows these planes better than the manufacturer. We also have cost certainty on important maintenance items for an extended period of time.”

Pool Program services are provided by Embraer Aircraft Customer Services in Fort Lauderdale, Florida, while heavy maintenance services are performed by Embraer Aircraft Maintenance Services in Nashville, Tennessee, currently the only certified E2 facility in North America. In the coming months, Embraer is working with Porter to provide services in advance of the aircraft’s entry-into-service process, including technical training, spare parts recommendations and provisioning services.

“With this agreement, we will broaden and deepen our relationship with Porter. Embraer will provide all necessary support, long before the airline starts operations with the most efficient single-aisle aircraft in the world, the E195-E2. We are very proud of the trust and confidence that Porter has placed in Embraer’s services and we’re eager to start our work together,” said Johann Bordais, President & CEO, Embraer Services & Support.