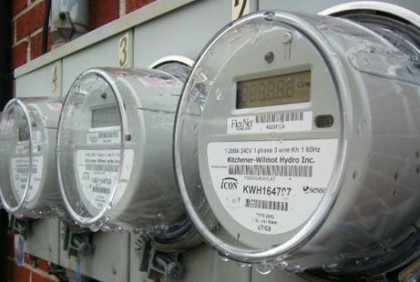 Unlike these traditional electricity meters, CircuitMeter’s WebMeter resembles a computer router. It collects all electrical data, including real power, volts, amperes, apparent power, power factor and time operating for 36 circuits per meter. It then transmits this information to the cloud every two seconds. PHOTO: CircuitMeter

TORONTO—Between rising costs and green energy initiatives, cutting down on unnecessary electricity usage has never been more of a priority for businesses. And one Canadian company thinks it has the solution.

Toronto-based startup CircuitMeter Inc. has developed a technology that monitors electricity usage in real-time at the circuit level and allows companies to pinpoint areas they’re able to scale back.

The system eliminates the cumbersome and expensive glass and steel of traditional meters, employing a computer router-like design that connects electricity metering to the 21st century.

“When we’re spending hundreds of thousands or millions of dollars on energy, why do we want to waste it?” Paul Mertes, president and CEO of CircuitMeter, asked.

Rooftop air conditioning units running through the winter, baseboards blasting heat during the hottest months of the year and entire floors full of office computers running through the night, every night, are just several examples of ways companies waste energy. In the U.S., businesses in the industrial and commercial sector spend approximately US$250 billion a year on energy. Meanwhile, the EPA and the Energy Star estimate that as much as 30 per cent of that quarter-trillion dollars is wasted.

A result of maintenance mistakes, employee apathy and a diverse range of other factors, wasted energy can be remarkably difficult to eliminate when companies simply receive a utility bill with one line noting the entire facility’s total usage at the end of the month.

This is where CircuitMeter comes in. 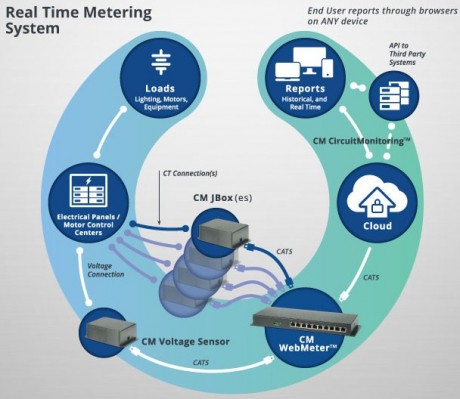 An illustration demonstrating how CircuitMeter’s WebMeter connects to an existing electrical system and the cloud. PHOTO: CircuitMeter

“In the complexities of HVAC control sometimes mistakes happen. [CircuitMeter] allows them to catch those things,” Mertes said. “When you start looking at [your usage,] you go, ‘What the heck, how come that’s on? That’s not supposed to be on.'”

After tapping into an electrical system at the circuit or Motor Control Centre level, CircuitMeter’s technology continually converts the voltage information to data streams and transmits it to the cloud. The company’s software then takes over, allowing customers to view their usage in real-time or in a wide range of different ways that show where and for what electricity is being used.

CircuitMeter’s technology is so responsive that if you were monitoring your energy usage on a moving curve and turned on a printer or stereo, you would see the real power level jump up immediately.

For manufacturers or large commercial spaces, the company’s software is capable mapping out the energy usage of individual machines, assessing their performance.

“We can generate an energy footprint for every single machine and compare it with benchmarks and then provide that on an ongoing basis and then notify [companies] when they deviate,” Mertes said.

Though submetering is not new, CircuitMeter said the way its technology integrates data collection with telecommunications is entirely novel. Meanwhile, perhaps its most significant selling feature is its price point. Mertes said the company’s technology is a fraction of the cost of its competitors’, in some cases as little as 5 per cent of the total. Using inexpensive hardware and software, CircuitMeter can offer customers its 36-circuit system for about $2,000. After this initial investment, companies often see a positive return on investment within one to two years, depending on the facility and how proactive management is about cutting down waste.

For its efforts promoting sustainability, CircuitMeter was recently recognized as part of Canada’s 2016 Clean50. Mertes, as well as the company’s founders, Daniel Seto and Michael Ordanis, who are now serving as CircuitMeter’s chief operating officer and chief technology officer respectively, were on hand to receive the award late last month.

And having already secured a number of high profile corporate and institutional customers, including one of the largest big-box retailers in the world, CircuitMeter is currently raising $8 million in revenue that will allow it to scale up operations and expand across the U.S. and Canada.

“Once we get this under our belt then we’ll start hiring a full-time marketing and sales group with an operations group to support that and [work on] pretty heavily expanding into the U.S. in particular and driving forward with some ambitious goals,” Mertes said.