In Toronto, Otis is providing 111 of its heavy-duty, commercial-grade NPE™ escalator units for the Eglinton Crosstown Line. 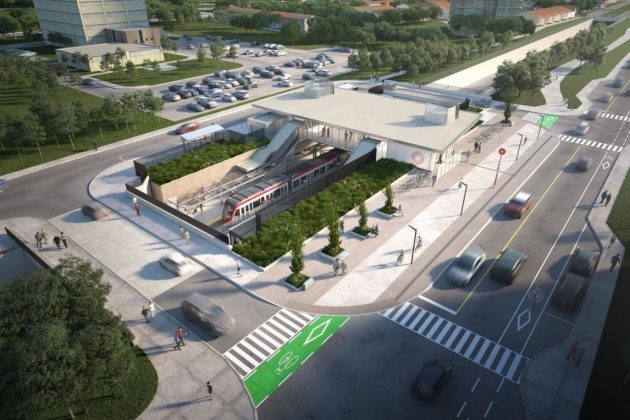 In Ottawa, Otis was recently awarded Stage 2 of its O-Train Light Rail expansion project for nearly 100 elevator and escalator units. Rendering provided by the City of Ottawa.

TORONTO — Otis has been selected to supply hundreds of elevators and escalators for six distinct projects across Toronto, Montreal and Ottawa. This includes nearly 100 units recently booked for all three of Ottawa’s Stage 2 LRT extensions. Otis is a global company in elevator and escalator manufacturing, installation and service.

“As Canada’s cities continue to grow, city planners and residents are turning to rail to provide critical urban mobility solutions while reducing congestion and emissions,” said Patrick Yeung, Otis Managing Director for Canada. “We’re proud of our work across Canada to make these daily journeys possible for the millions of Canadians living in or near these cities. These projects underscore our commitment to supporting rail and other transportation infrastructure projects in Canada and around the world.”

In Toronto, Otis is providing 111 of its heavy-duty, commercial-grade NPE™ escalator units for the Eglinton Crosstown Line, part of the largest transit expansion in the city’s history. The project adds 25 stops and connections with multiple bus and subway lines, and is expected to be complete in December 2022.

Otis is also providing five Gen2® elevators and four NPE escalators to Toronto’s Line 6 Finch West Light Rail Transit, an 11-kilometer, 18-stop line that will include 16 surface stops, one below-grade stop, and an underground interchange station at Finch West LRT station. Metrolinx and Infrastructure Ontario awarded the contract to Mosaic Transit Group in May 2018. Construction has been underway since 2019, with the elevator and escalator installation expected to begin in the second quarter of 2021.

In Montreal, Otis is currently installing 79 elevator and escalator units across 26 stations for the REM light rail network. The project includes 45 Gen2 elevators, 22 NPE escalators and 12 additional elevators. Construction is expected to be complete in 2023.

In Ottawa, Otis recently completed work on Stage 1 of the Ottawa O-Train Line 1 providing 58 elevators, including 46 Gen2 units and 10 hydraulic and gearless elevators, and modernizing two existing units. Otis was also awarded Stage 2 of the project with an additional 69 units – 59 Gen2 elevators and 10 NPE escalators – across 15 stations both east and west. Elevator and escalator construction on Stage 2 is expected to be complete in July 2023.

Otis will provide an additional 28 Gen2 elevator units for Ottawa’s O-Train South extension. The contract was awarded in Q4 2020 and construction continues to progress.