Wildrose finance critic Derek Fildebrandt caused a disturbance on the floor by openly criticizing Kathleen Wynne, who was invited for a visit 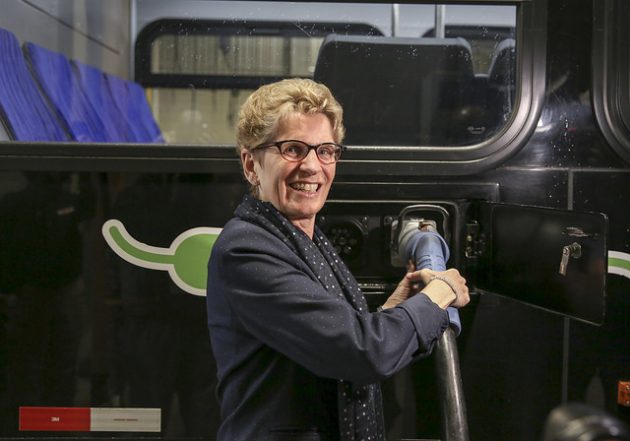 EDMONTON—Ontario Premier Kathleen Wynne came to Alberta to talk environment but instead found herself publicly ridiculed on the floor of the legislature as the leader of a failed, debt-ridden enterprise.

As Wynne looked on from the Speaker’s gallery during the May 26 question period, the opposition Wildrose party demanded to know why Wynne, a Liberal, was invited while right-centrist and next-door-neighbour Saskatchewan Premier Brad Wall was not.

At one point government house leader Brian Mason looked across the aisle at Fildebrandt and said matter-of-factly, “you are so tacky.”

Fildebrandt held up Ontario as an example of what not to do in government given that Alberta is now moving to rack up high debt loads to pay for capital and operating spending.

“Currently Ontario has the largest subnational sovereign debt on the planet,” Fildebrandt told the house.

“They’re now even receiving equalization payments. It’s an example of what happens when a government fails to get its spending under control.”

Fildebrandt’s comments had NDP members visibly seething on their side of the house. Wynne, for the most part, sat expressionless, save for the occasional wry smile.

“In the past, when Alberta has actually been able to play a leadership role in the country, they have done so by being grown ups,” she said.

“Just today we have had demonstrated to all Albertans very clearly why these folks over there (the Wildrose) are simply not ready to govern.”

Earlier in the question period, when Wynne was introduced to the house, the NDP and the Progressive Conservatives, along with Alberta Party Leader Greg Clark, stood to applaud her.

About half the 22-member Wildrose caucus stood to applaud as well. The rest, including Leader Brian Jean, chose to sit and pound on their desks to express their welcome.

Earlier that day, Wynne met with Notley and praised her climate change plan.

Wynne said Alberta’s actions also benefit the rest of the country as it wrestles with issues surrounding environmentally responsible development.

Ontario is soon rolling out its own climate change plan, though Wynne’s liberals have thus far refused to release any hints on what measures the plan contains.

The premiers also announced a plan to pursue joint initiatives in areas such as reducing greenhouse gas emissions and ramping up renewable energy use.

Notley’s government is implementing a climate plan that includes a broad-based carbon tax, a cap on oilsands emissions and the phase out of coal-fired electricity.